and it's my flyer and new bobbins! *squee!*

Wow.....AA is so cool! He included a rack to hold all my new bobbins, and unless I am totally mistaken, it's out of the same wood as my wheel. (American Chestnut)

I ended up with 6 new bobbins (2 more than I actually ordered, but I'm not complaining!): 2 are definately for flax - they have a little ridge in the middle to keep the yarn from sliding around (per Steph - she's the expert!), 1 that matches my "favorite" bobbin, and 3 others. If I'm not mistaken, the dear man made me a complete set (identical to the ones that came with the wheel) + the one for silk. I'll have to check my other bobbins when I get home, but the numbers sure do look familiar. That would explain the extra 2 bobbins!

This is great - since the Norwegian is my "travel" wheel, I wanted to have at least 2 bobbins that were identical. (AA isn't like Ashford or Schacht et al; each of his wheels comes with 3 bobbins and each bobbin has a different whorl size. You can't just order new bobbins, either - he wants the flyer back so he can make sure the new ones work properly. It makes sense to me - I have 1 Ashford bobbin that just isn't "right"; it doesn't spin smoothly, but there's not enough drag for me to complain to anyone about it. I just don't use that bobbin. Since Ashfords are all assembly-line type wheels, it's just something that you live with)

For demos, I'll pack the 2 alike bobbins, plus 1 of the "closest" for plying on. Or.....maybe I'll just haul the rack with me so I have ALL of my bobbins, in case the mood hits to spin something else while I'm out and about. *g* 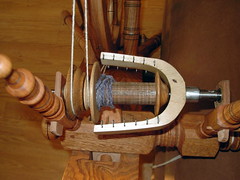 aa norwegian flyer
Originally uploaded by fiberaddict75126.
Here's a picture of the flyer and bobbin array, with my "favorite" bobbin. The whorl size is 1 3/16. 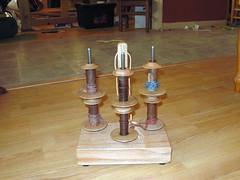 aa bobbin rack
Originally uploaded by fiberaddict75126.
This is the bobbin rack Alden made me. As you can see, it holds 6 bobbins. 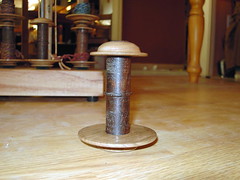 aa flax bobbin
Originally uploaded by fiberaddict75126.
A closeup of the flax bobbin. The ridge is there to keep the flax from sliding around, if I remember correctly. I need to ask Stephenie again.

I have 2 flax bobbins, 1 silk bobbin, 1 bobbin that's "identical" to my favorite, and 2 others. The whorl sizes are totally different from what I already had - I need to sit down and figure the ratios and all, but yea! I have 9 bobbins for my Norwegian wheel!!

I need to sit down and play with them...but I'm 1/2 done with Christmas present #3, and I want to get it DONE. Friday has been slated "get to know the new bobbins" day.
Collapse