So, I finally got around to posting a couple of pictures of this amazing, gorgeous shawl. The pattern is the "Lace Comfort Shawl" by Sara Bradberry. The yarn is handspun dragonhair (I think the colorway was "Dragon Queen", but I honestly can't remember). It was knit on size 8 circs (mmmmm, ebony!)..and took a little over a month (I think - it was knit in my spare time, with a little time off for good behavior).


J. took this picture - it's a little dark, because he isn't real familiar with digital technology, and I didn't think to go in and edit the photo before I uploaded it. Ah, well - hindsight is 20/20. 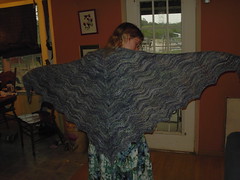 Here's a closeup of the lace pattern - basic feather and fan/Old Shale. This shawl is neat - you start with 3 stitches and increase every right side row until it's long enough. 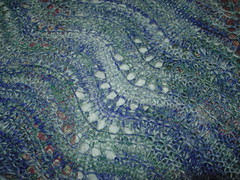 I really, really love how this turned out. I'm thinking I need to make me one out of the Chasing Rainbows silk (in the "More Teals" colorway) that's currently on the Norwegian. It's a yummy, yummy roving - it's spinning up like buttah, I'm getting good consistancy with, and it should ply up at about lace/fingering weight. Have I mentioned it's yummy?

so we should be good for a while. To-wit:

1) My strep-throat, which I suffered thru on my wedding day, and to which I decided to add an ear infection. Fun stuff!

2) J. blew up the engine in his truck last night. You know what they say about mechanics and their cars......

3) Himself totaled his glasses (again!) today. Totaled as in - they're broke, which is no biggie, but he then LOST one eff'ng half of the bloody things. LensCrafters says it's no big deal, but the cost will be closer to $100 than the $27 I paid last time. (Because, you see, they have to make a new LENS this time. :sigh:)

We'll be running out to Mesquite either tomorrow afternoon or Sunday afternoon. It just depends on how things go - I am having a spin-in tomorrow, damnit! I *need* the fiber fondling!

So much for the slush fund I was looking at out of this paycheck! The good news is that I've overpaid the daycare, so I can float it a bit (and not pay the full amount...which is *great*)