Busier than usual - this was the weekend of the Arlington Highland Games. Last year they moved it from June to May, to give us cooler weather....yeah. I froze all weekend. :lol: It wasn't busy, and I didn't have all the idiots ignorant people that I usually see.

Friday we went and did set up. I was worried - I had 2 goats (Risky and Dulce) down and not eating. This is BAD - a non-eating goat is generally a dead goat - so I was pretty concerned. Got home Friday afternoon and both goats were still with us, but not eating. Dulce was limping...I gave her banamine and Thiamine, and gave Risky Thiamine, and played the wait-and-see game.

Saturday AM, both girls were better, but not eating. So....more banamine (both, this time) and, because I had no other ideas, I wormed them. I spent the day slightly worried.....but both were NORMAL when we got home. :weird:

Saturday was Star Wars day (May 4th....May the Fourth be with you!), AND Free Comic Book day. There's a Comic store right down the street from the Stadium...and they had a sketch artist there doing free sketches. SG wanted a sketch of Himself and Herself, but Himself weaseled out (he doesn't like photos/pictures of him....:whatever:), so instead, SG got "his girls" done. 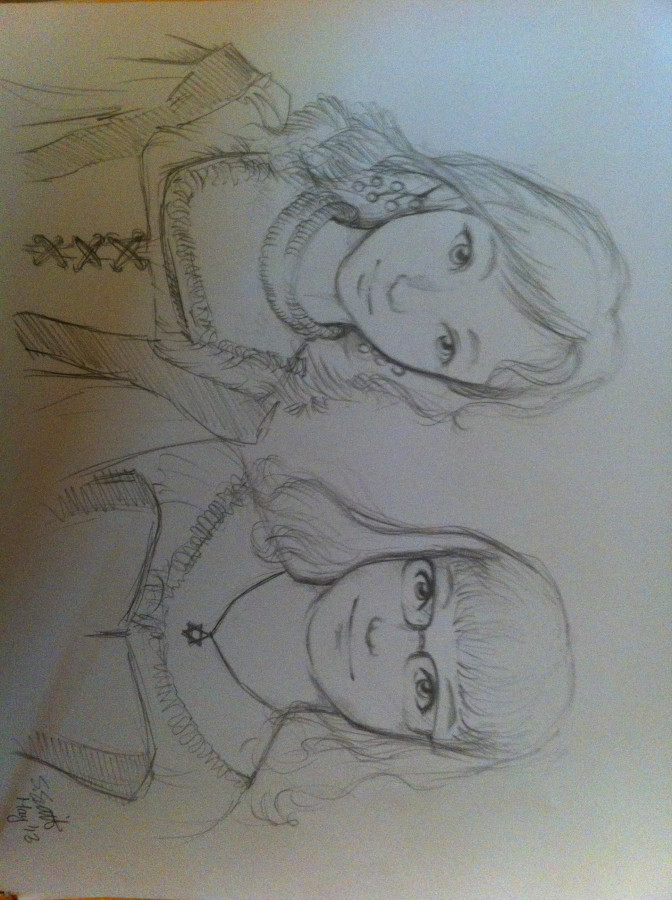 (Sorry it's sideways - LJ won't let me edit it for some reason, and I finally gave up.) This is what she and I would look like as anime characters. :lol: The artist was FANTASTIC - she spent a lot of time talking with Herself about art in general, and comics in specific. It was a good time..and then I had a panic attack on the way home. Not sure why....but the corset had to come off NOW and I couldn't breathe...and....:sigh:

Sunday AM, Kaylee was down and not eating, so I wormed her (why not?)...and she was FINE when we got home. So...I wormed EVERYBODY yesterday evening.

Anyway, yesterday was weird....but good. My favorite jeweler was there (he's a Clan Cousin*), and he offered Herself an apprenticeship when she turns 18. They spent HOURS talking yesterday about jewelry-making....she's nervous and excited about this opportunity. Me? Waiting. IF it's what Yah wants, we'll know. If not, no need to worry about it now. (Also, he took my Celtic horse bracelet with him - the stone had a developed a crack, and he said he wouldn't stand for that. So, it's gone "home" to be cleaned, polished, and have the stone replaced. FREE. He does good work, and warranties his stuff for life. I didn't know that....) He gave her a list of stuff to get/do, so she can start....this is going to get interesting, I think. (I also ended up buying a pair of earrings from him...my ONLY purchase at the Games. They're pierced-work, Irish Wolfhounds. Gorgeous. And what started her talking with him, because she said it looked "easy" to do. He concurred, and the conversation took off from there. Best $40 I ever spent! :lol:)

Overall, the Games were good. I had 1 lady tell her son that my spinning "this is how they used to make yarn!" Ignoring the fact that I was sitting Right In Front of Her, happily turning wool into yarn. Even her son gave her a look...:snicker: 1 guy showed up, bragging that he had woven his kilt....look, that's great, but...tartan? Not so hard to do. (It was his attitude - we should all bow at his prowess, because HE wove a Kilt! And...he has a ASHFORD wheel, and spins sewing thread on it. Riiiiight. Ashfords are nice, but NOT really suited for spinning froghair yarn. Again, it was his attitude....HIS wheel was fantabulous, and we should all be in awe of him. :sigh: I stroked his ego a bit, but it was hard to do.) Other than that, it was boring. I got 4 bobbins of singles spun, and about half of it plied off. One of my Clan Cousins has decided that the yarn would make a beautiful shawl, that would match her outfit perfectly. I can take a hint...:lol: (It's in the queue. It'll take a while, but shawl it is.)

I need to take a few days to recover - I was....fragile yesterday. Not sure why, but....:sigh: I went in mundanes - a Clan shirt and sweats - but it was still a bit..wobbly all day. Weird. (What's even weirder? I got asked by another Clan member if I was "a member of the Tribe" - because he FINALLY noticed my Star of David (I've only been wearing it for....4 years now. All the time.) I didn't even hesitate - Yes - and....I felt "normal". I don't even....I'm not sure WHAT was going on, but there it is. I was fine the rest of the day, for the record.)

Oh! We got some of our cousins hooked on Star Fluxx....:heh: Just spreading the joy.....

*I kinda feel like I need to explain this. We're active in our respective Scottish Clan societies (both McDuff (SG) and McClellan (me)). Every member is related to the Clan(s) somehow; membership is voluntary. All members are "Clan Cousins" - think of it as the ONLY time you get to pick your family. :lol: Some of us are related for "real" - my Regional Director is not only my SIL, she's also a cousin 4 or 5 times removed - and some are only related thru the Clan, but they're all family. In a way. I could join...7 societies, I think, but have chosen just these 2 (for now)....I don't need a huge family. All trying to score soap and hand-knits. :lol: BUT - it's why Herself was offered the apprenticeship now, instead of waiting - she's "family", and interested in the craft. We'll see where it goes.....

This entry was originally posted at http://fiberaddict.dreamwidth.org/752489.html. Please comment there using OpenID.
Collapse