:sigh: This week hasn't been a good one....thank the Lord it's over!

Yesterday, the kids cleaned the doe barn. Herself was worried about the youngest chick ("Pudge"), so she brought him (her?) up to the house. I ended up chick-sitting...he wouldn't eat, wouldn't move, his eyes were swollen shut - it looked like someone had picked on him - so he ended up in my palm, next to my lap.

I got him to take some sugar water.....then the stupid thing decided to die. :big sigh: Herself's a little upset, to say the least....

In better news, I made more cheese! (I have to. I figured out the milk thing - I changed what we're feeding the goats. See, up to last year, we'd been feeding a sheep and goat pellet made by the "local" feed mill. They screwed up, and got shut down by OSHA, so we started hunting closer feed sources (I preferred them, even with the distance - feed that was only 1 week old beats feed that's been sitting in a warehouse for months!). We tried *every* sheep and goat feed we could get locally, and the goats hated all of them. We ended up - both to save money AND to coax them to eat - mixing TSC's All-Stock Sweet 50/50 with Alfalfa.

Then I started reading.....seems that Sweet feed - even the "slightly sweet" that TSC claims - is bad for rumens. It can cause acidiosis (bad!).....and *I* decided it really wasn't worth the risk.

So, about a month ago, I took the goats OFF the All-Stock, and switched them all over to 100% Alfalfa. The milkers also get some Black Oil Sunflower Seeds, Oats, and Beet Pulp on the stand.....and our milk production has gone Thru. The. Roof.

Yesterday, I made a 1 pound batch of Fromage Blanc (a soft cheese; it has the texture of cream cheese) and a 2 pound batch of Queso Fresco (semi-hard cheese, simple and quick.) Today, I have Mozzerella started.......then I'll do a batch of...something. Hard cheese, but not sure WHAT yet.

I HAVE to get ahead of the milk, here. I have....3 gallons in the studio fridge, and another 1 in the house. And that's not counting tonight's milk! (We got 2 gallons this AM......I don't know HOW I'm going to get ahead of the game, here!)(Not complaining!!! The cheese'll be nice come December!)

And in other, other news, my bracelet came back from our cousin! Behold: 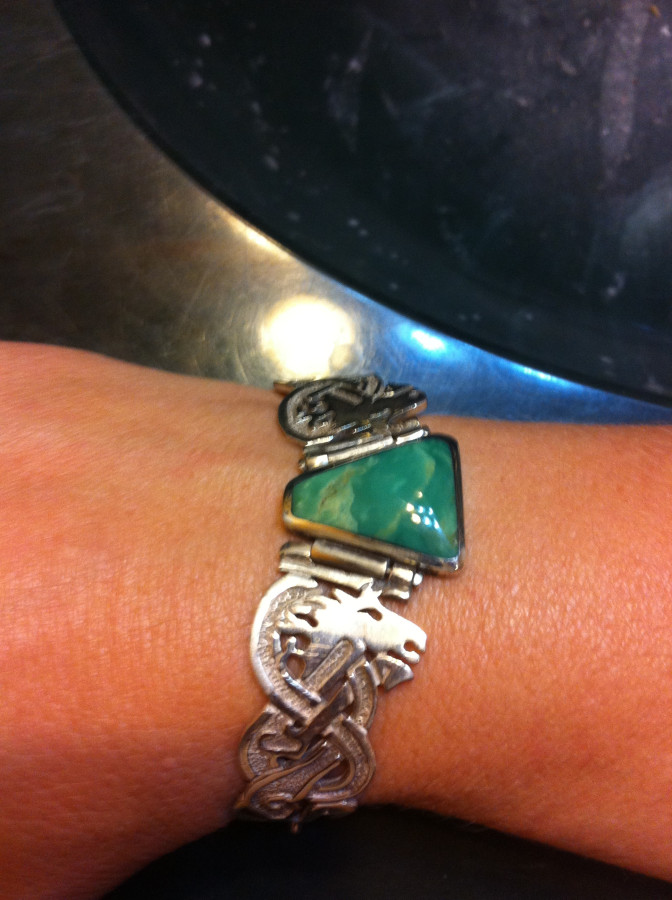 Michale Duncan is uber-talented. (This is the cousin that's offered Herself an apprenticeship.) My bracelet is about 10 years old, and has been worn a LOT. He replaced the stone - it's Pixilated Turquoise - because the original developed a fissure; that's the ONLY problem I've had with it. His work....well, if you're in the market for Celtic-themed jewelry, may I humbly recommend that you look at his stuff? :lol:

Gotta run - my Mozz is almost at temp. Shabbat Shalom!

This entry was originally posted at http://fiberaddict.dreamwidth.org/759520.html. Please comment there using OpenID.
Collapse