woke up this AM to bucks out. SG finally finished their feeder (um. Yeah. The feeder that took me 3 hours to build a few years ago in the doe barn is still going strong. It took him 2 months...and, well...) and bolted it to the fence. I casually mentioned that it was just the right height for a buck to hop over the fence. He said, well, no - they won't do that.

This AM, I had *2* bucks out - 1 in the barn, making a mess and stinking up the place, the other trying to get to my bucklings. :sigh: It took 45 minutes to catch the stinky, smelly things - and I still had to milk. :sigh: SG and Himself ended up putting the last of the kennel panels up there, to make it too tall for an eager buck to jump. :big sigh:

Anyway. I spent most of the morning sewing a new project bag - the one I've been using is falling apart (and has been since I bought it.) I managed to figure out how to reverse-engineer my current bag (not hard, but) while adding a leather bottom, and figure out how to attach leather straps.

I was successful - but it IS a bit wonky: 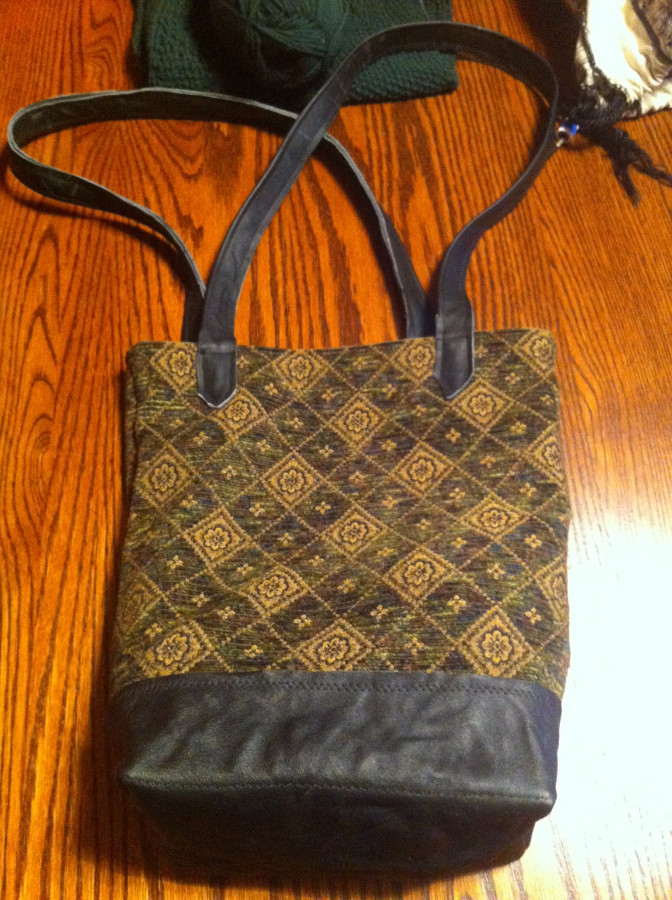 The outside is a tapestry fabric (the same one we'll be using for chair cushions, actually - I found 2 more yards of it at Hancock's); the inside is an olive fabric that's bonded to batting. THAT was fun to sew! (It jammed up the serger when I tried to sew the bottom corner seam. :sigh:) Because of the batting, there's no pocket - but I made one out of matching leather, and will be getting a lanyard clip to attach it to one of the handles.

The strap ends are...well, wonky - but I'm happy with it.

And the reason I needed a new mid-size project bag: my Aran. Been working on it for....2 years, I think. :sigh: No reason - it's just dark yarn, on dark needles, in a semi-dark room. :lol: BUT.

I am posting about it for accountability purposes - I NEED a hand-knit sweater. I figure, if I post what I've got done (even though I WILL be putting it down this week - I have a hat, 2 pairs of fingerless gloves, and a Scottish Tam to plow thru before Hanukkah), maybe somebody will poke me about it in a month or so, to keep me moving forward on it. So, photos: 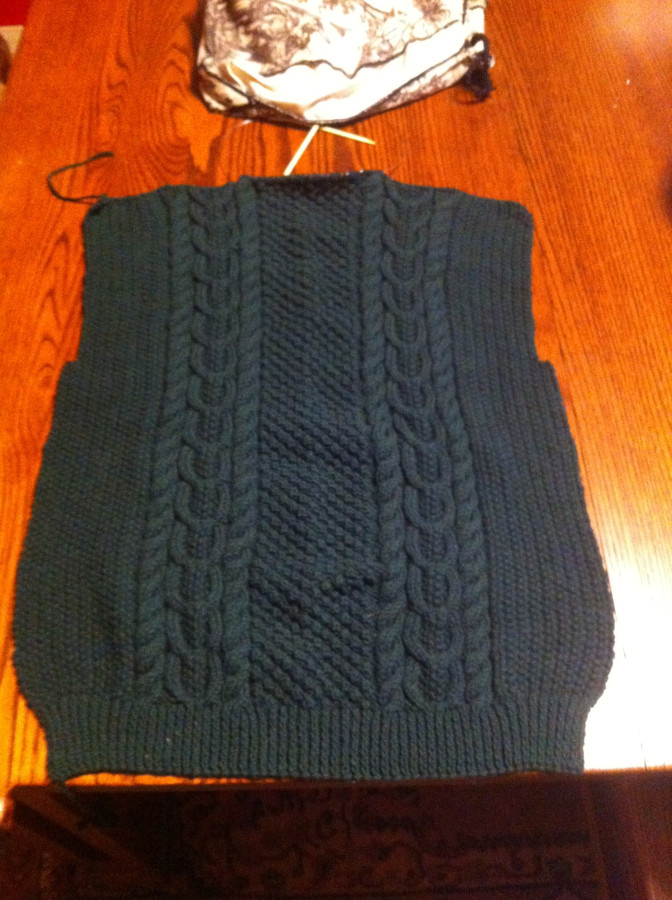 It's been done almost forever - this really is a fast knit, once you get going on it. I put it up...and kinda buried it under other projects. :sigh: 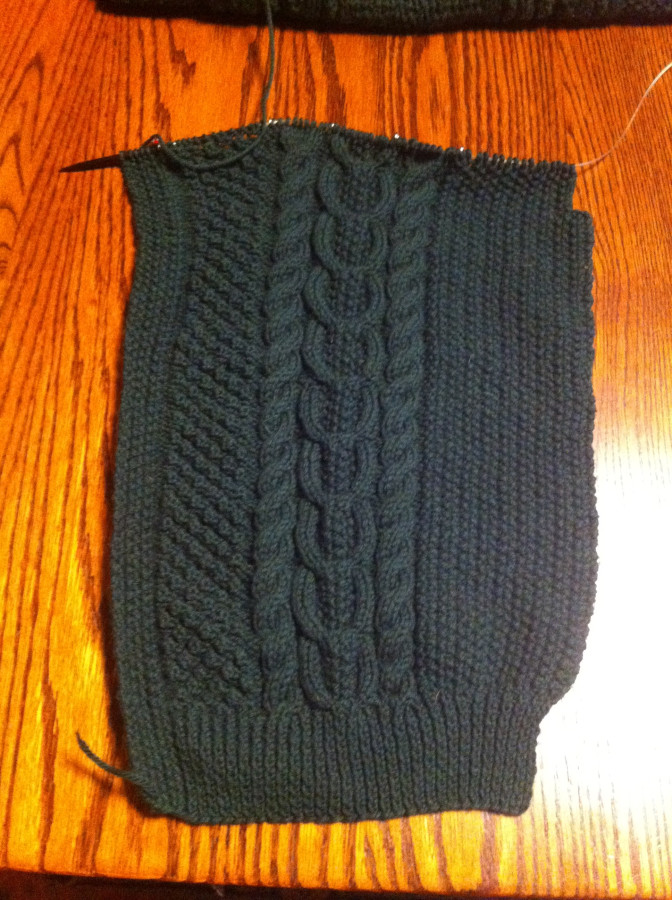 I've got 4 more repeats before the left front is done, then I have the right front (WITH buttonholes, how fun!) and both sleeves to do. Then the making up, but that goes pretty quickly. (And if you're thinking it looks kinda familiar - it IS. It's the same pattern I knit for SG and finished in 2010. His is a soft, mossy green - love it, but I look better in darker, jewel tones. :lol:)

So, if y'all'll poke me about the sweater every now and then, I'd appreciate it. I LOVE the yarn, the needles are ebony and are so smooth and slick it's a pleasure to knit with them - I have no excuses (except the afore-mentioned presents that need to get done. The hat and 1 pair of fingerless gloves are Hanukkah prezzies; the other pair of mitts needs to be done by January and the Tam needs to be done by March. I figure I might as well knock them out now, so I can get back to the sweater.)

Not much else going on - we (Herself and I) cleaned the Studio yesterday while the boys were working on the buck feeder, but it's been a pretty nice and quiet weekend. Rained last night - Praise the Lord for it! Hope y'all are having a nice weekend, too!

This entry was originally posted at http://fiberaddict.dreamwidth.org/775118.html. Please comment there using OpenID.
Collapse