Oops. :lol: Been busy - today's our Anniversary, and I baked cinnamon rolls for breakfast. :yum!: Then *I* got the day "off" - been busy. Wrapped all the Hanukkah prezzies, and have done some knitting and some thinking.

First up, let's do pictures! Auntie's hat was finished Friday (after a death march....Thursday afternoon I started to loathe/hate/detest the hat): 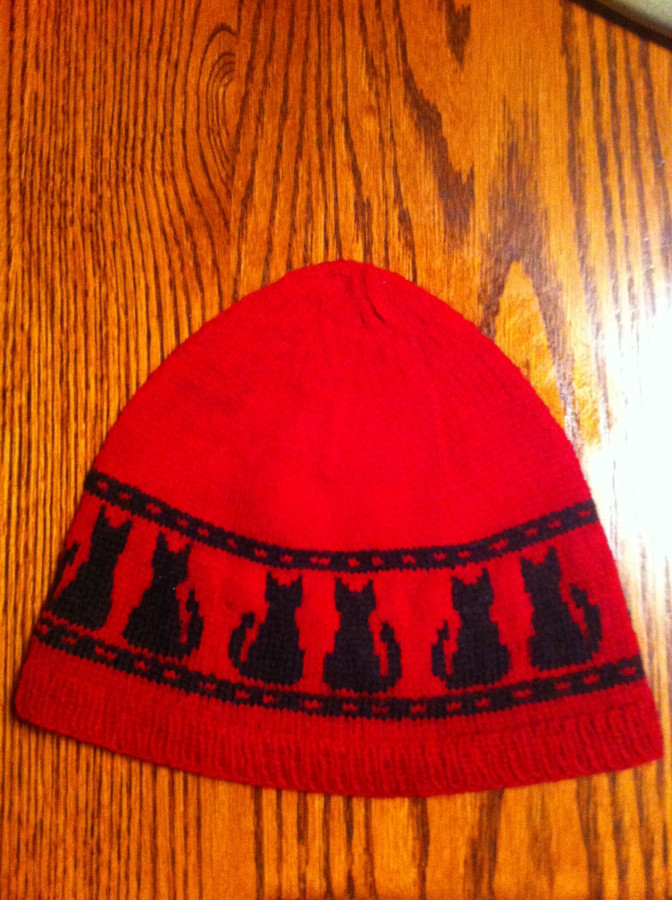 It took for-freaking-EVER to do all the decrease rounds...I think that's why I got so sick of it. Anyway, it's done, it's blocked, and it's *wrapped*. I need to order some more red before I can start the matching mitts...that's on the slate for the end of the month.

THIS is what I started today: 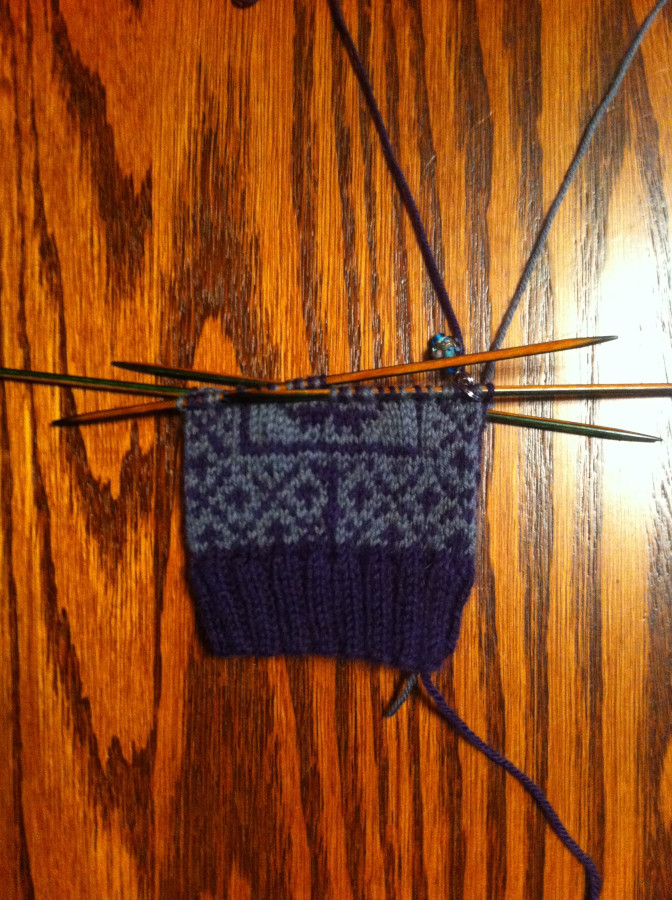 It's the Owl Mittens by Spilly Jane designs - LOVELY pattern. Lots of color-changes, but it's fun. And pretty quick-going. These weren't my first color choices; I didn't think I had enough of my brown/tan leftovers so we did a yarn-store run yesterday. The first store....kinda sucked, but I won't hold it against them - they were having a knit-in. The 2nd one had a lot of solid color yarn in the weight I needed...but no browns. Herself and I conferred...I decided that machine-washable was important and she found this lovely Angora/Merino blend...it's YUMMY (AND machine washable!). And I need to go back and get some for *me*, because this is such a pleasure to knit up!

And for the record - I am NOT spending all my time sitting and doing nothing but knitting. I'm not a super-fast knitter, but I don't plug along. This is maybe 2 hours worth of knitting - done in 15 to 30 minute clumps. I can't spend a lot of time AT a time knitting - my wrist won't let me (and it's why I don't knit on Shabbat - I figure my wrists need the rest.). So...just wanted to toss that out there. :lol:

We're studying Exodus 20 right now - the 10 Words (usually translated Commandments). We are having a lot of deep discussions about the lessons - I don't chastise my kids for interrupting me IF the discussion turns out relevant. We were discussing the 2nd - the one about NO symbols - and Herself asked me about chrismess trees. She pointed out, not only are they *pagan*, but....they are symbols, and they are something OF the Earth - which the 2nd word clearly says is a NO-NO. Yup. She's correct (and we had a LONG discussion over that - the whole asherah poles/trees, and the pagan practice of hanging things/offerings on trees, and.....yeah.)...and then Himself asked about the cross - and I liked his question, so I'm going to quote him: "Why do people wear a....murder weapon as a symbol of their religion? Because the cross is....well, it was used to KILL someone. Isn't that....well, kinda sick?" Yup. In fact, the Complete Jewish Bible translates it as "execution stake" - which is actually IS. And....WHY was it chosen as a symbol to represent Messiah (which, again, according to #2, we are NOT to do!!!!!)?

This led us to a discussion about my Shabbat candlesticks - they're the Messianic symbol (menorah on top of a fish, with a Star of David in between.). Um. The fish.....is something from the sea...which is prohibited. But I'm not using them as representations of God.....still, I'm working this one out. I have a feeling that they'll be gone soon and we'll use the silver (plain) ones instead.

After all, we're told that if we love Him, we'll keep His commandments, right? And...this is #2. So.....it's something to think about, right?

This entry was originally posted at http://fiberaddict.dreamwidth.org/776467.html. Please comment there using OpenID.
Collapse