OK, I told y'all about the Heritage Homestead Fair this weekend. Here's some photos of our handiwork: 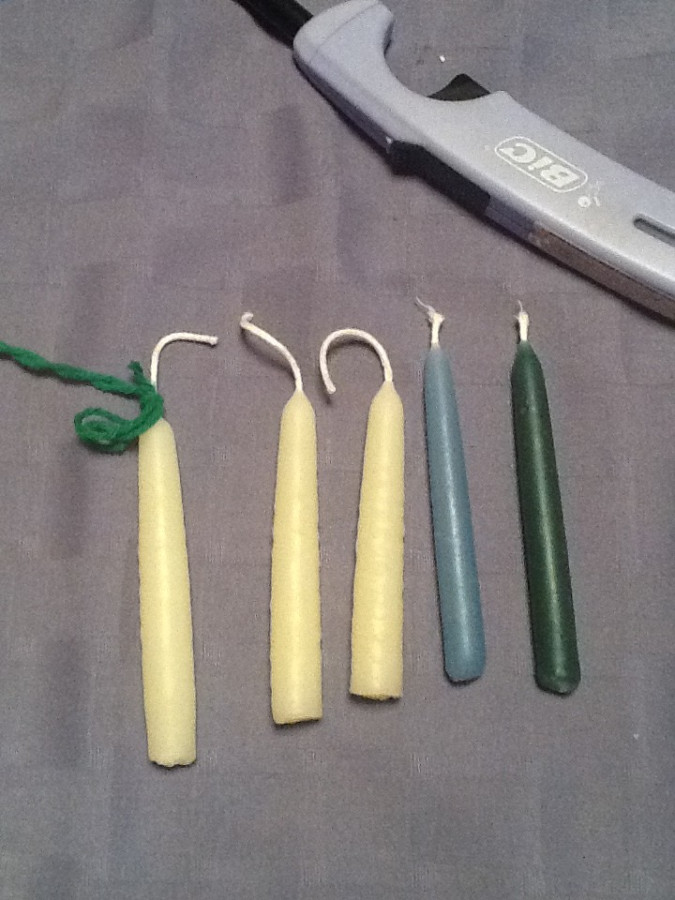 Himself did the blue one, I did the green one, and SG and Herself each did 2 of the white tapers. 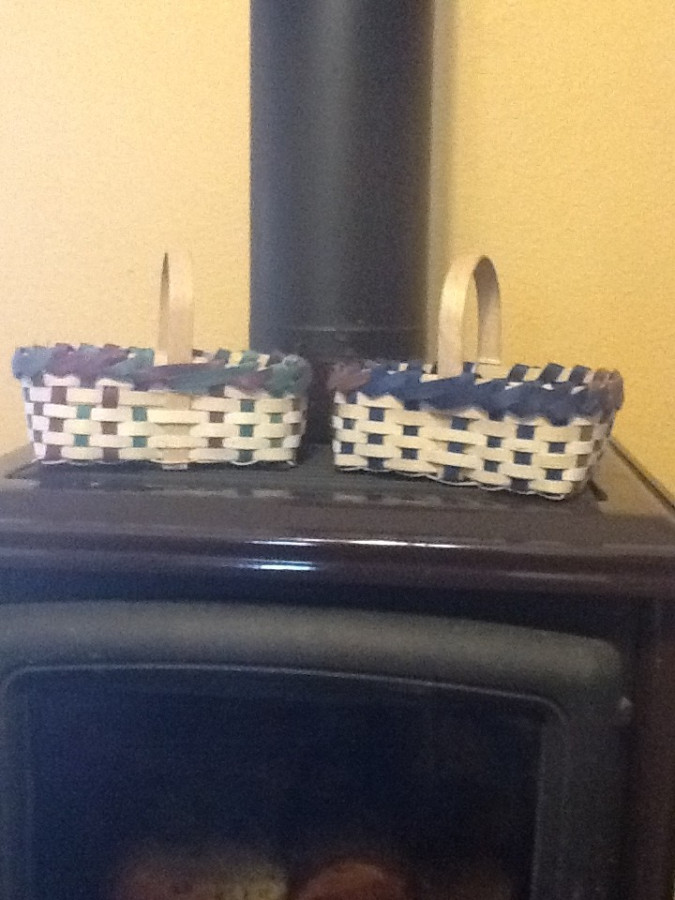 Mine is green and purple; Herself's is blue and brown. These were fun, and actually easy to weave! 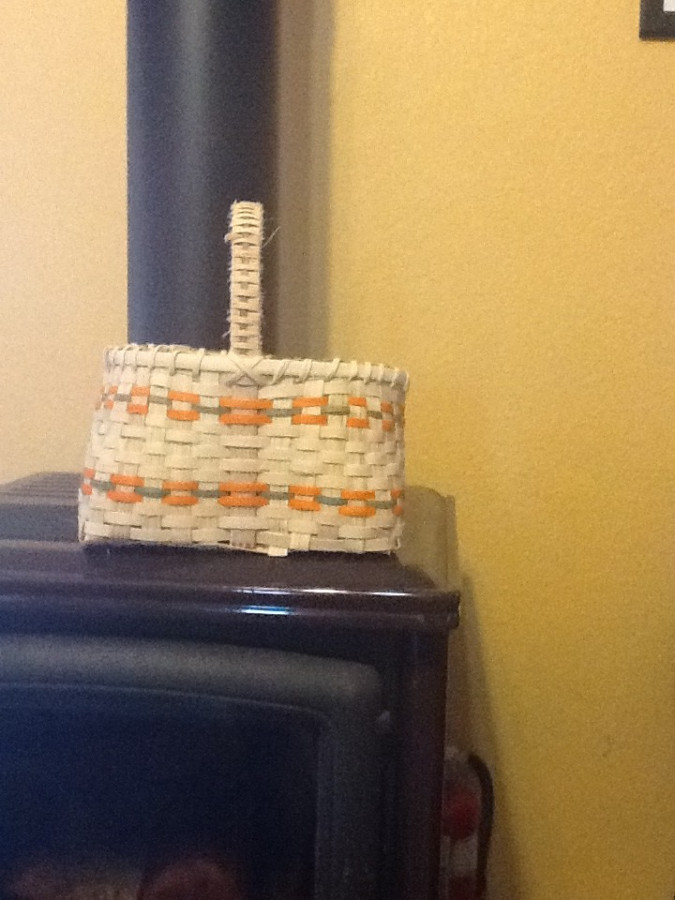 It's a bit wonky, and it's not as tall as it should be (well, let me rephrase that. It IS as tall, but not as many rows. I need to work on my packing-in skills. And my tension.) Still, it's a basket, and it's perfect for holding yarn. :grin:

And then......hold on, let me set the stage. Monday I went and got my Jeep inspected. I was a little leery - I JUST paid it off, so I kinda expected it to fail. It passed...but the driver's side window FELL. :sigh: Monday evening Himself managed to pull it back up, so I called it good.

Yesterday was office day. Left at 6; the window was up. Got on the freeway and the window started to fall. :sigh: It was 46* - TOO cold! I pulled off, but couldn't get it back up. It only fell to the halfway point, and there it stayed while I was at the office. SG took off at lunch....sent me a quick link, then went to pick up Snips. :sob:

Um. The link.....the local-to-us Animal Shelter had 11 Blue Heeler X puppies available. And...it's close to the Firestone we were taking my Jeep to. :oh no!:

I ran home, got the kids, and headed to Firestone. Then we all piled into SG's car and headed out...to the Shelter. (Before anyone says anything, SG and I had discussed a new dog. We both agreed it would be a shelter pet, we wouldn't rush it, but we were open to the idea. Snips left a HUGE hole, and we felt like we did need to fill it....at some point)

The shelter is small...but they had about 50 dogs. The puppies SG were interested in (SO CUTE!!!!!) were in isolation - they had gotten a cold, so no adoption of them. But.....

We looked at all the dogs. Himself was told HE could choose - IF he wanted. There were 2 catahoulas there, but they were very very shy. A dobie...but not really friendly. And puppies....oy. A TON of cute li'l fuzz balls...but Himself wasn't interested. Until he saw 2 black dogs in separate pens. A black female "Swiss Mountain Dog" (my ass - lab cross, maybe.) and a black male lab. The female was let out first - she made a beeline for Himself, knocked him over, and proceeded to lick his face while holding him in a bear hug. :snicker: We put her up, and got out the male.

Who proceeded to ignore us. He ran to the end of the room, marked both sides of the door, and proudly told all the other dogs that HE was out, and they were not.

So. Guess who came home with us? 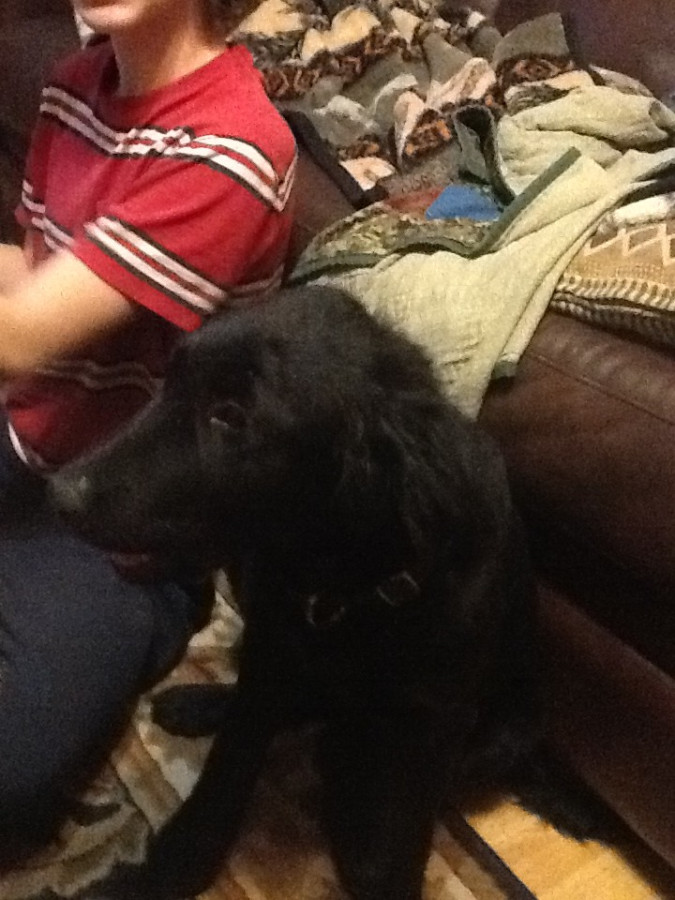 Meet "Chloe". She's about 4 months old (maybe), very sweet, and very very soft. Hard to photograph - she's SO black it's not funny. She's figured out the pet door, but isn't sure about WHY it's there. (She's a puddle-hound. I didn't know a puppy could have such a large bladder! :lol:) She's all paws and tail right now - and Himself is just all over excited about her. She fit his "requirements" - she's sweet, she's (pretty much) fluffy, and playful.

We take her back in February to get spayed, and the Shelter has a trainer that offers 6 weeks of free training to every adopted dog. I'll be calling her today.....Chloe is sweet, but Himself needs to train her (and we'll use the training on the other dogs, too. Win/Win.)

She was quiet last night - no whining, no destruction...just a lot of bombs and puddles. :sigh: Ah, well - this too shall pass. And we'll have a nice dog at the end of it all.

Today Himself gets his braces......the dog will help with that. :lol:

This entry was originally posted at http://fiberaddict.dreamwidth.org/780216.html. Please comment there using OpenID.
Collapse