as we have to run out and milk in a few minutes.

This weekend was pretty busy - the Maytag man didn't even show on Friday. He called SG at 11 (our window was 12-5) and said, "Oh. I have to order parts - they should be in by Tuesday. I'll call to set up an appointment then." :bangs head: We had to go to the laundromat yesterday, in the rain, to wash everything. :sigh:

SG got a new toy tool - a small lathe. He's all excited about it. :lol:

The Lizard socks are DONE! Finished them Friday at 4:30 - would have gotten pictures, but....

Saturday was "Empty the Shelter" day in N. Texas. We - because SG is a softie - visited 2 shelters, fell down....and got followed home. I Know, I KNOW - we're nuts. But......it was kinda hard to resist this: 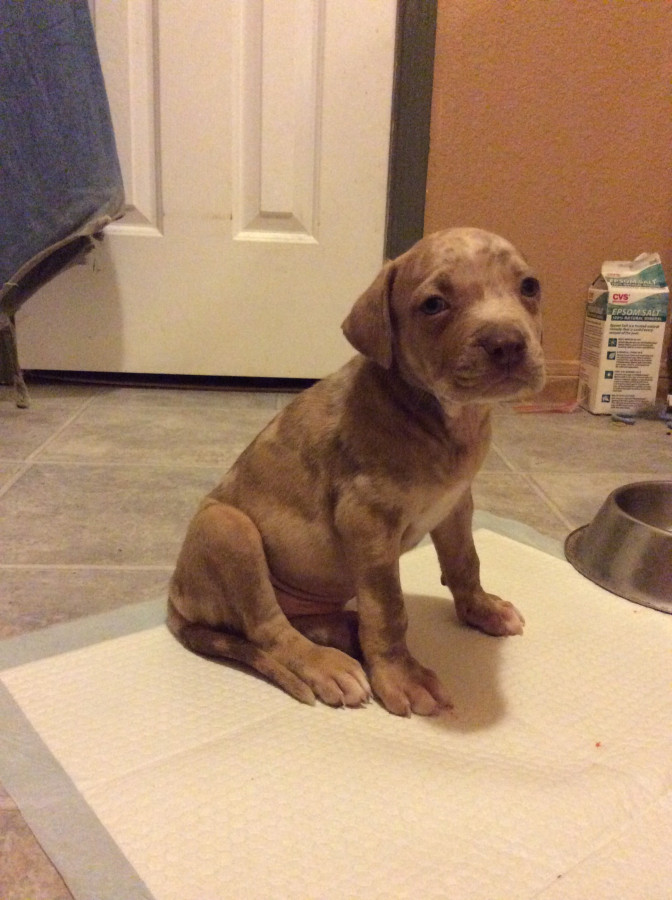 He's 8 weeks old. Mom is a Catahoula, dad is unknown. Total sweetie, and already spoiled rotten. I have spent the last 2 nights on the dog's futon, because he will NOT shut up when he's alone. I get it - he had 7 siblings, and this is the first he's ever been away from them. I can't let him in our bed - I'm afraid he'd fall off; it's tall and he'd get majorly hurt - so, futon it is. And it is NOT comfortable. :sigh: The things I do......

The shelter was swamped (free animals! Yea! Let's go get Bubba a pet!) and they told us they'd already told a bunch of people that the puppies were NOT available....we have a problem with dog fighting here. :sad: So.....they were more than happy to hand him to me and rush the paperwork, because hey! We had kids! And other dogs! And were specific in what we "wanted" (because I figured if I had a narrow list, we'd get out unaccompanied. Um...that didn't quite work) - male, medium to large breed, gets along with other dogs/goats/horses/kids. We weren't looking for a generic pet......

Loki is his current name. He's been really good about telling us when he needs to go potty - *1* accident! He waits until he's outside to do his business, which is Amazing for an 8 week old puppy!

Gotta run; we gotta milk and I need to start a batch of cheese. And figure out how to take a nap sans Loki...I'm tired!

This entry was originally posted at http://fiberaddict.dreamwidth.org/810125.html. Please comment there using OpenID.
Collapse