First up, have a photo - SG's very first lathe project. 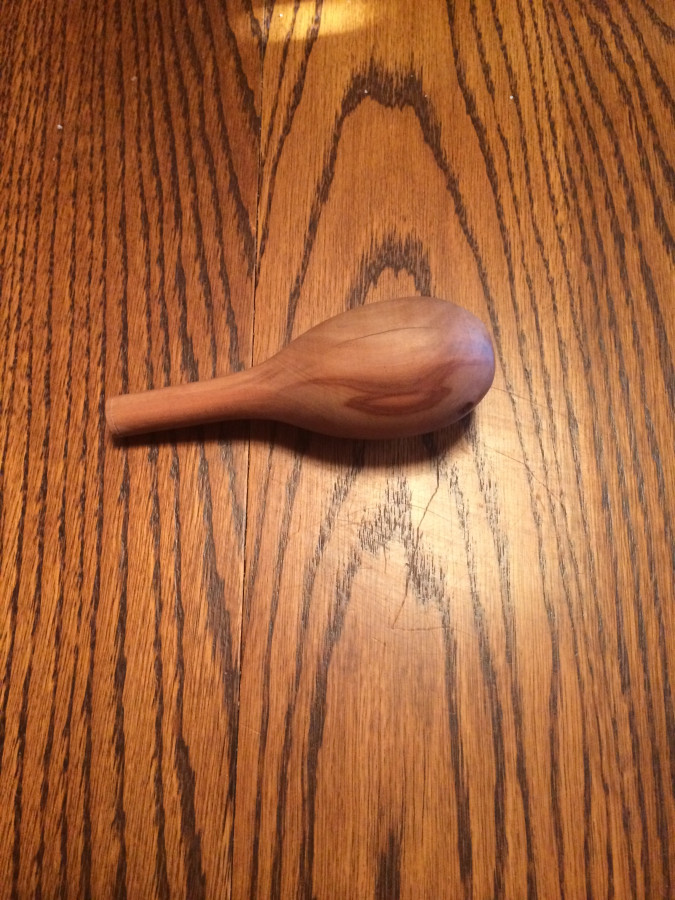 I was mistaken; this is made out of peach wood. He's upset because he cut the handle 1/4" too short; me? It fits in my project bag better. He says he'll try again....I keep telling him perfection is over-rated, but hey - more darning eggs for me! :lol:

We just finished Lev. 26 today. HEAVY stuff! It lays out Biblical prosperity - and hey, the church got it wrong Again!

Torah says that IF we keep the covenants (more on this in a minute!), THEN God will make us prosper. How? By giving us enough food, shelter - everything we need. Key word: NEED. Yes, He'll even give us more than we need to just survive, which will provide many of the *wants* we have, but we are promised everything we *need*. That's....that's a very humbling thought, and very comforting. (And yes, He does keep His end of the bargain, as long as we keep ours.)

Thing is......WE have obligations, too. What are those? (You won't hear this in church!) Well, when you accept Jesus (Yeshua) as your lord, you are adopted into His family. THINK about this, because it is key, and most chrischun churches totally ignore this - they practice replacement theology, which is WRONG. YOU are adopted into Yeshua's family...which is what? The JEWS. Hebrews. God's Chosen People.

So why do we think that Gentile members of Yeshua's family have a different set of rules from the "biological" Jewish members?

We *do not*. When we are adopted into God's family, we come under the covenants God made with ISRAEL. And we are expected to follow them. THAT'S the only way we can partake of the blessings God has promised His chosen - and Lev. 26 lays it ALL out.

Yes, the sacrificial laws have been fulfilled by Yeshua's sacrifice...but there are other laws we are expected to keep as members of God's family. The eating laws, for example. And the clean/unclean laws. And no, Paul did NOT say that we as Gentile members are exempt - in fact, he kept saying over and over and over again that we were NOT. The thing with adult circumcision that everyone trots out to "prove" that we don't have to keep those pesky laws? Was to not put too much of a burden on adult men - think about it! Adult converts were allowed to forgo circumcision, but the expectation was that they would circumcise their sons - thereby fulfilling the everlasting covenant with God. They were expected to follow the Sabbath laws, and the food laws, etc. In fact, they were expected to live *like Jews* - because, guess what? They WERE Jews - Jews who believed in Yeshua the Messiah!

Follow God's laws, and the Blessings will flow. Ignore those laws, and curses will follow....and I'm seeing that. Our Nation.....every time our leaders tell Israel to give away land that God gave to *them*, our nation is hit with divine punishment. And it's only going to get worse....and thing is? Believers will be affected too, because we LIVE here. You thought Katrina was bad? Sandy? The current drought? It's going to get worse unless we as a nation all repent...and I don't see that happening. (Yes, Katrina and Sandy were God-sent. Remember, God uses the natural in SUPERnatural ways......)

Anyway, gotta run. I ran my bills Tuesday, and came up short. :gulp: Tuesday afternoon, I got a phone call with a small job that paid *just enough* to cover the shortness. God IS good! And I need to finish said job and get it back to the employer!

This entry was originally posted at http://fiberaddict.dreamwidth.org/811590.html. Please comment there using OpenID.
Collapse