This dress is in time-out for now. I reinserted the new diamond - one side with pocket, 1 side without. The without side I did "correctly" - I ripped all the seams, tried to sew in the insert (more on THAT in a moment), then re-sewed the seams, running the side seam in 1 go. :sigh: Here, have some pictures:

This is the side done the way the pattern tells you to do it: 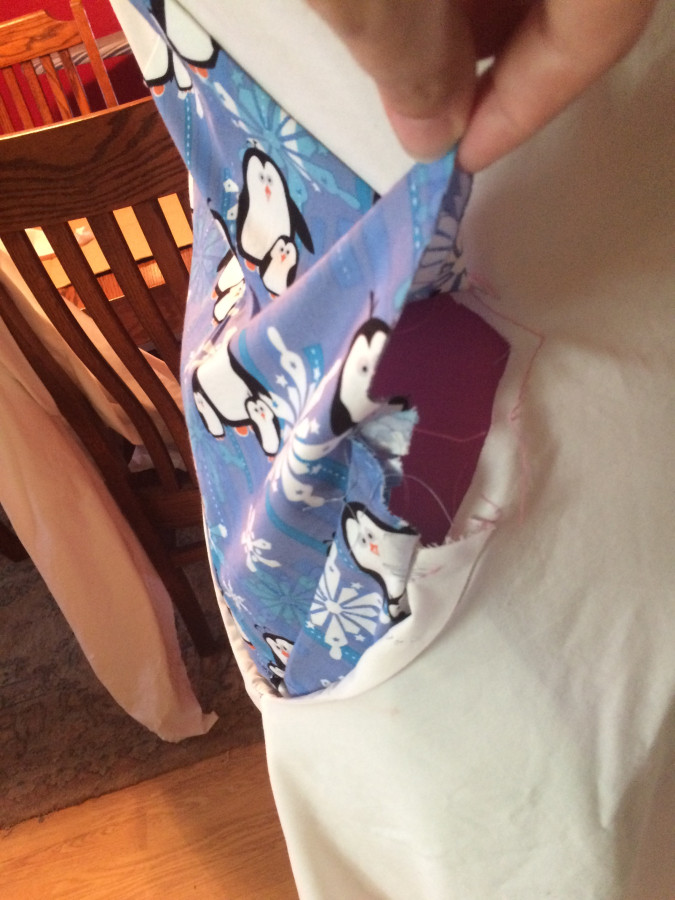 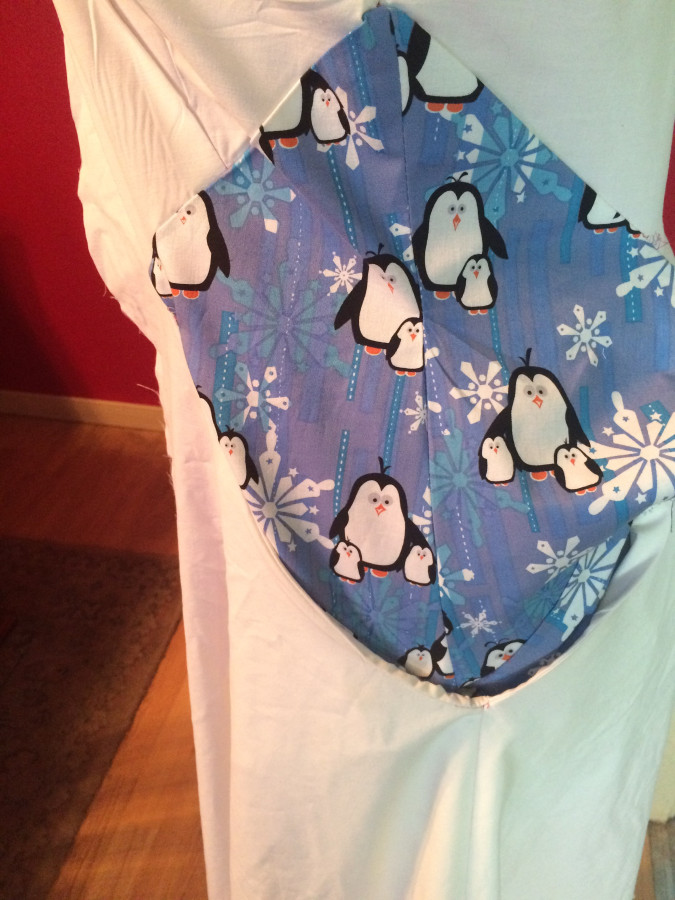 There are gaps on either side....

Here's the side with the pocket removed: 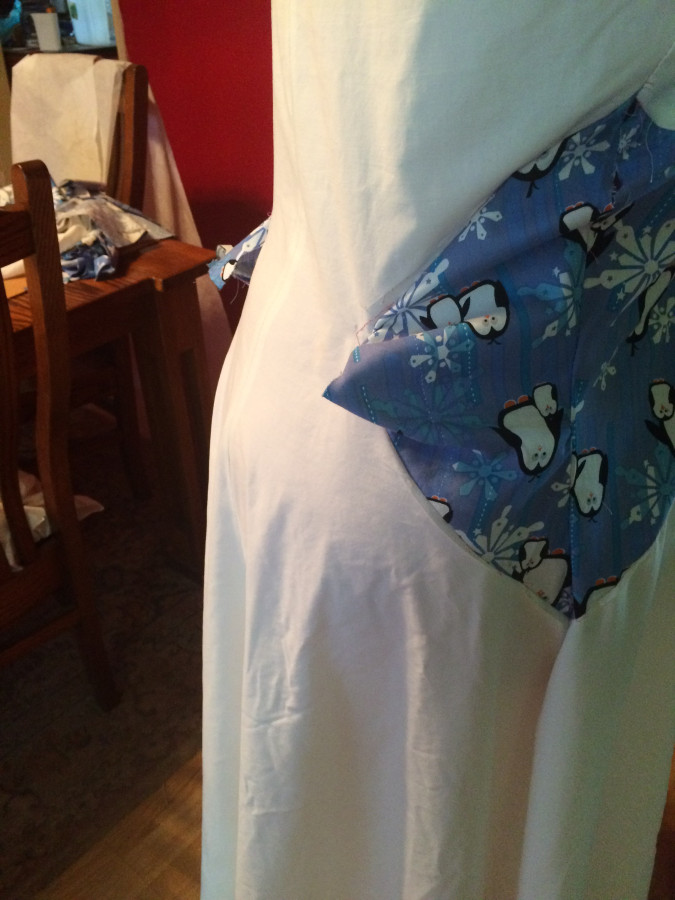 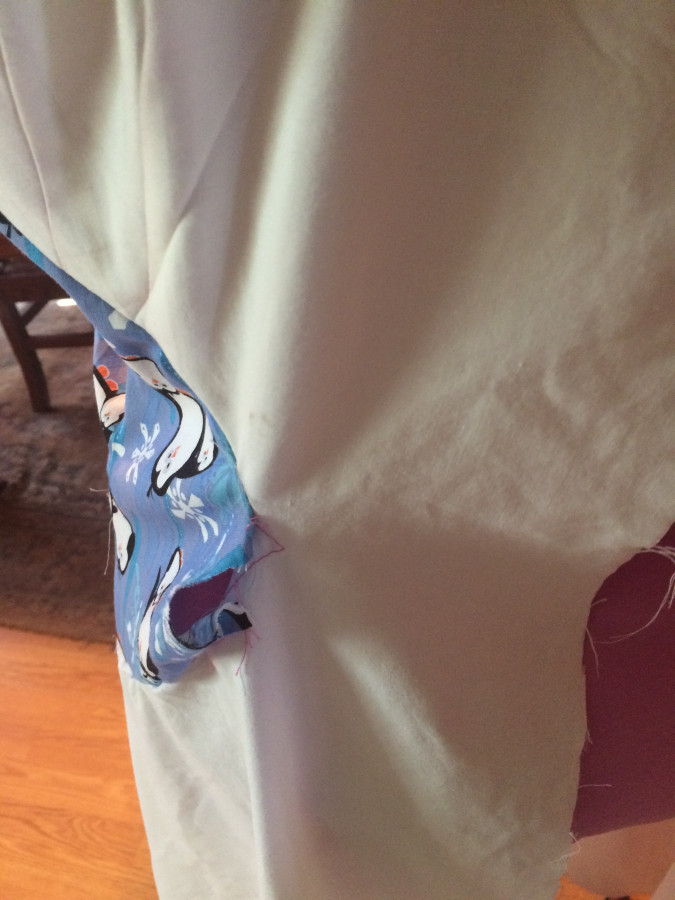 Yes, the penguins are upside down. I'm not sure WHY, but that's the way it wanted to fit (but...if I attached the pocket to it, they were right-side up? I dunno WHAT'S going on here....

Here's the front, without the zip. There's a good 1" overlap, it looks like: Problem (MY problem anyway): the bottom fits just fine. The top, though - it doesn't make it to the top corner. If I MAKE it fit (which I have done, by easing it in - which the pattern does NOT mention!), you still have that "L"- and it will NOT match up. I've tried matching up the bottom (which is already sewn to the facing, remember) - and it just WILL. NOT. FIT. :bangs head: No matter how I sew it in, no matter how I pin it, I still end up with a bit of the "L" that isn't attached to *anything*. The drawings in the pattern do NOT help - they don't show this part, they only show what it looks like after everything is sewn in - and *I* don't see any stitch lines on the "L". :sigh:

So. I am going back to the drawing board. I am going to re-trace the dress front and back as designed. THEN, before I cut it out (because I have 2 complete sets already cut out), I am going to lay it over the inserts, and trace the side curves (because this dress IS NOT straight-sided, oh no. It's slightly curved. Of COURSE it is.). I will then cut out the new dress pieces. (And don't forget I have had to Frankenstein this dress anyway, thanks to my big hips. I am going from a 38 (which, by the way, is NOT my bust size - it's my *over* bust size, so I still get to do some tinkering *there*. Fun stuff!) to a 46 (which....I am not sure is going to fit correctly *anyway* - the muslin looks awfully tight in the hip area.)

Tomorrow we are going to the outlet store. My budget is suddenly smaller (because I screwed up and put off applying for Herself's disability - MY fault. I didn't want to admit that she IS disabled, so I ignored it. Now, I am paying for it with less money each month. :sigh: SS takes FOREVER to decide disability cases, and they usually DENY it the first 2 or 3 times. :big sigh: MY fault...but after paying bills, I have $0.39 for groceries. Don't panic - SG's aunt will give me some money for her expenses (it goes to SG's account and pays her bills), and SG said I can have some of it, so groceries ARE covered, just not now. :shrug: It's not like I don't have a full pantry and freezer - it just means I need to use some of my fabric money for necessities today. But not all of it - darn it, some of that money is a payment on my sock machine, and THAT I am keeping for fabric.)

Anyway. Tomorrow I plan on getting as much muslin as I can (along with enough fabric for a couple more dresses) - then I will attempt muslin #3. It should go MUCH easier, since it's just a plain dress. I will fit THAT, make the changes to the modified pattern, THEN I will draw the diamond insets on the "finished" pattern, cut them out, add the 5/8" seam allowance to *them* (since it's already in the dress itself), and make muslin #4 (hopefully out of "real" fabric - but not my cherries! :lol:)...which should, if I've thought of everything, be a wearable dress. Finally. I'm thinking of doing muslin #5 (again in real, but not cherry fabric) WITH the pockets, using MY pattern pieces. We'll see.

So - that's where the dress stands at the moment. I did say I love a challenge, right? Because this? Is a challenge. Oh, and Hearth - thanks for finally pushing me to actually JOIN the pattern review site. I hadn't done so, because I have too many memberships and didn't want to add another time-sink. However...the 1 person who has attempted this dress had the same type of problems I am having with the diamonds. I honest think there's something screwy about the shape, but.....:shrug: I am not an expert or a pattern designer, and I'm sure there's some reason for the "L" cut-outs. *I* just can't SEE them.

OH, and to top everything else off...this AM Tigger and Chloe got into it AGAIN. I have no idea what sparked it - I was at the bar putting on my fitbit when it went from everything's-coming-up-roses to I-hate-you-and-want-to-EAT-you. SG came out and grabbed Chloe (she got him with 1 tooth on his finger, but immediately let go); I grabbed Tigger, who Chomped down on my leg. I kicked her (sorry, but that HURT), and she let go and lunged for Chloe AGAIN. :sigh: She's banished to the bedroom, Chloe is sort of repentant, and I have 5 tooth-marks on my leg. I've been bleeding since 5:00......yes, I hit it with peroxide (I am allergic, but what do you do?) AND tea-tree oil, and it's bled enough that any icky stuff that was in there is gone now, but...:sigh: It's slowed to a trickle now, but....I have a lovely bruise (I bruise at the drop of a hat, so that's nothing new) and a lovely set of teeth marks. The detectives can use it to positively ID the culprit, I guess....:lol: and :owowowowowowowow:

I am going to go knit for a few minutes. That's something I can do successfully. :lol:

This entry was originally posted at http://fiberaddict.dreamwidth.org/845028.html. Please comment there using OpenID.
Collapse