Hearthie poked me, so here are a few photos of the finished dress. I don't have any "action" shots yet - I am planning on wearing it out and about tomorrow - so you're stuck with closeups on Cat. :lol:

I...need to work on my finishing skills. The bias tape worked out OK (I need to work on THAT, as well, but this was made basically freehand. I found :oops: a bias tape maker stashed deep in the drawers last night....:sigh: I'll use it NEXT time.), but the sewing on of it...well, it needs work.

Herself suggested I mix the bias tape - use green on the print, and print on the green. I did...but I wasn't as accurate as I'd like on the transitions: 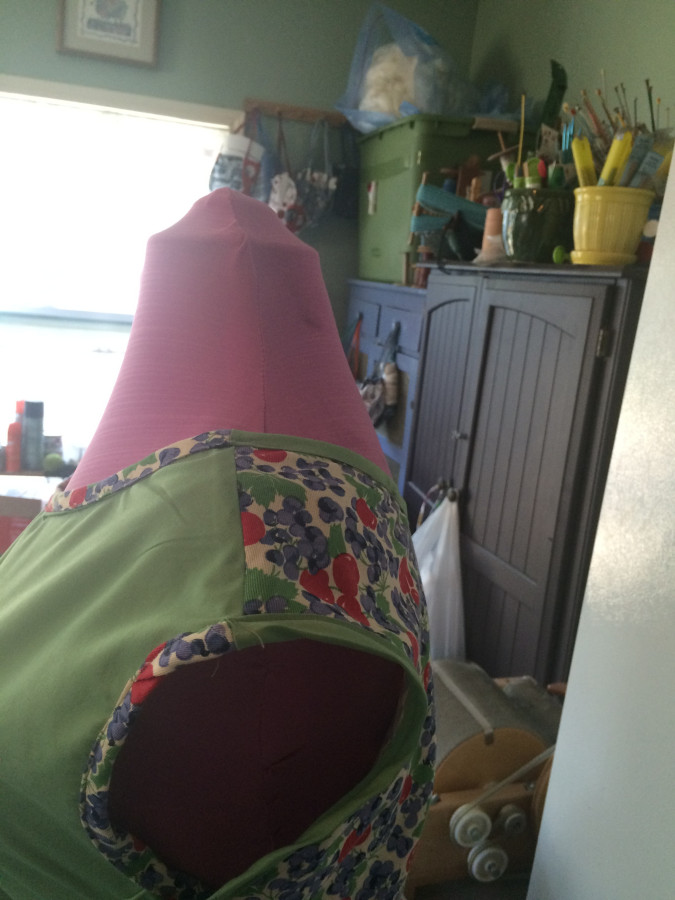 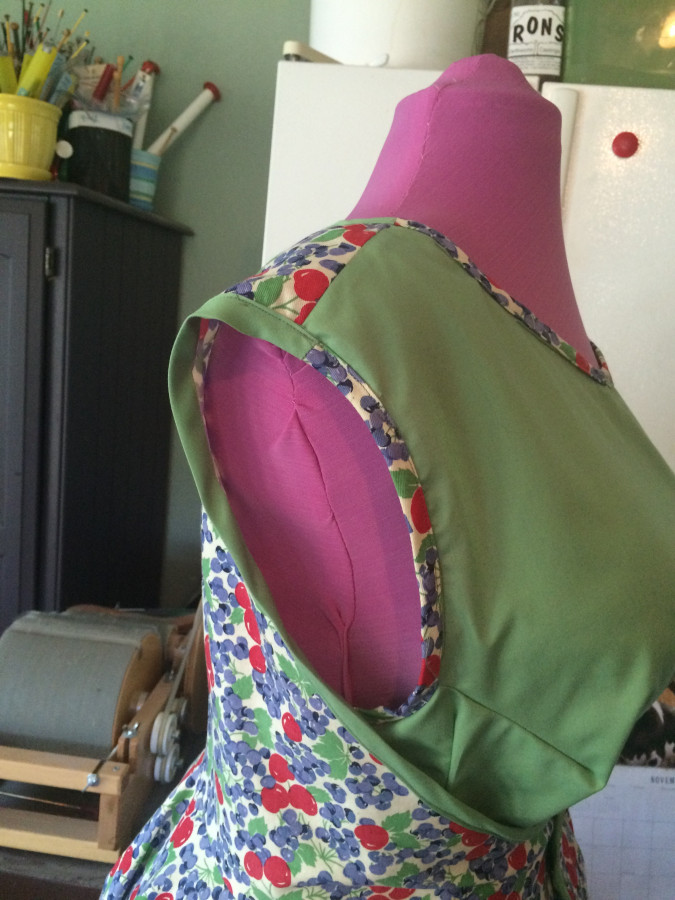 Not horribly bad for a first attempt....but I want to do better! The neck looks OK, but there's a bit of a bobble...not sure what's going on there. Again, it looks OK.....I just need more practice. 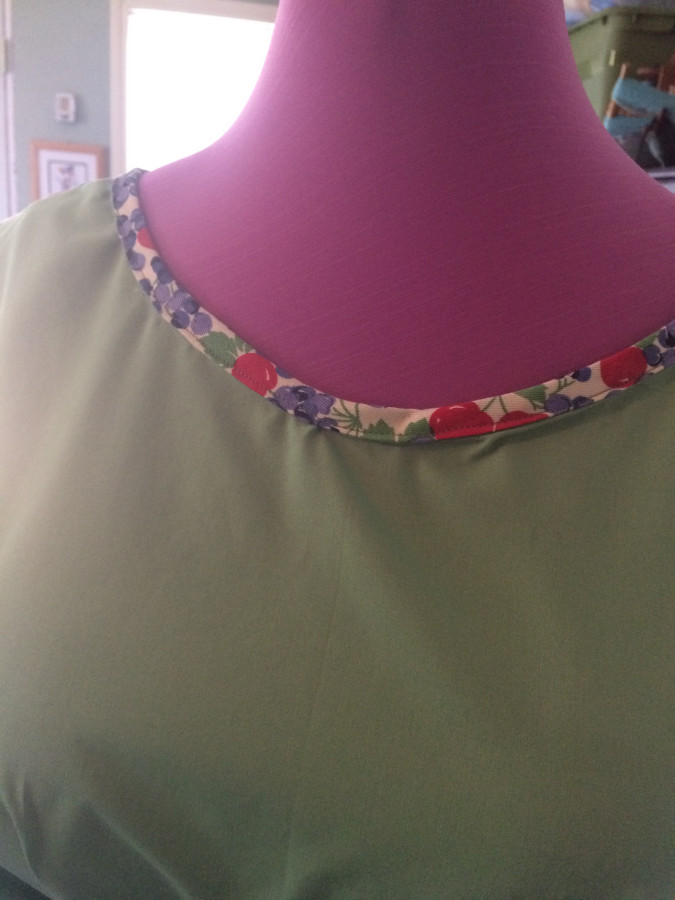 And the buttons on the waist: 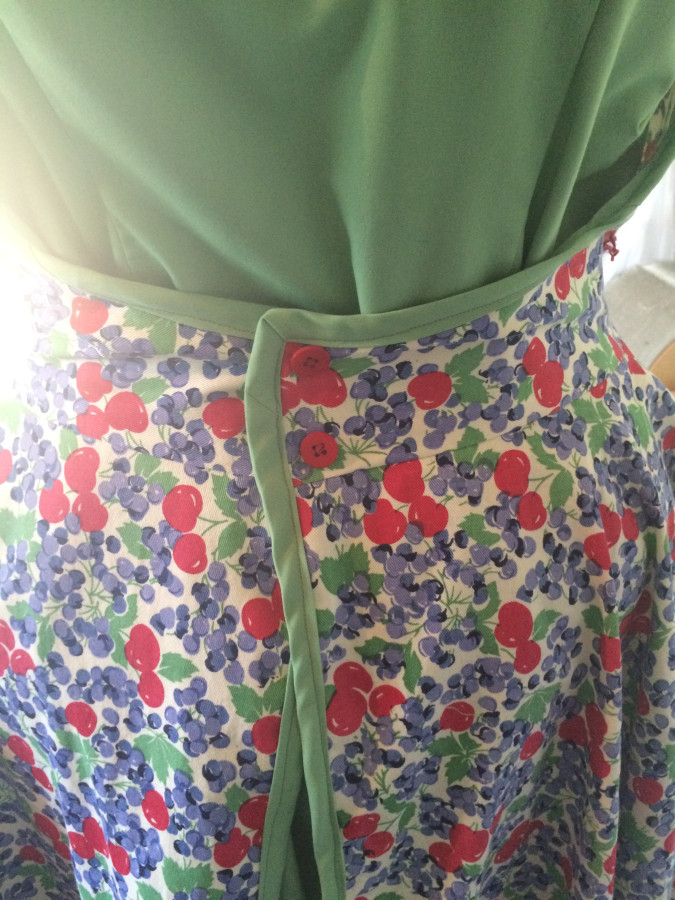 I'm not sure I'm happy with them - they are OK, they were in the stash, but....I kinda wanted blue domes. I'll keep looking - but these work.

Tuesday saw the dress finished, and some tops for Herself begun. I traced the pattern and cut it out of some UGLY poly knit that a friend of Mom's gave her...it's...um. This fabric will still be here after Armageddon - it's pretty much obviously synthetic. :lol: It was an ugly brown, and felt like old support hose. :ick: Still, it worked to fit the tanks, which is what matters, right? 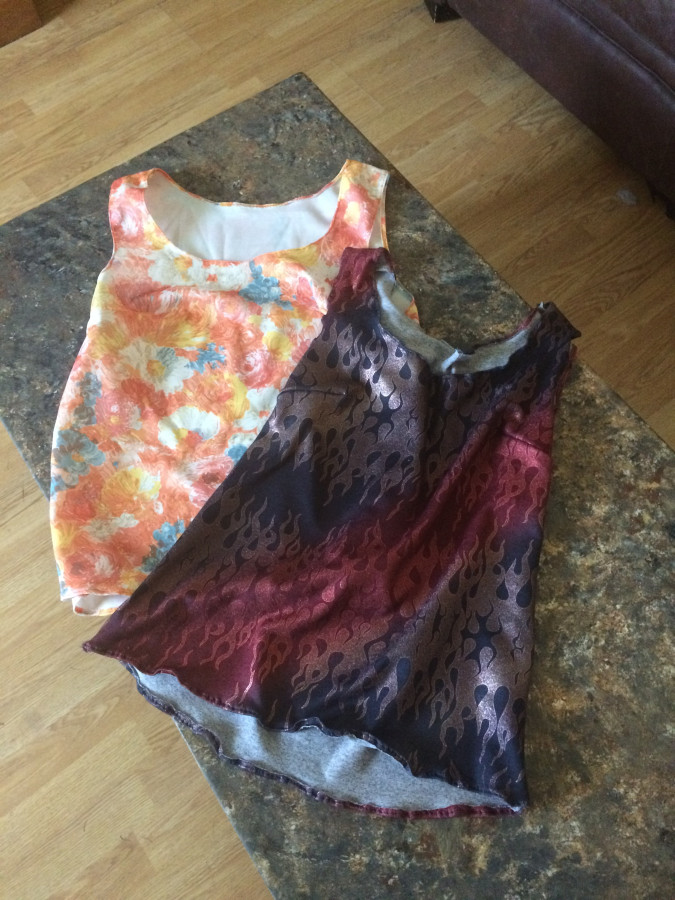 She hasn't taken the boho one off since I finished it. (!!) (She was in the middle of a game with Himself, and Not Happy that I wanted a photo. :lol:) *I* need to do some reading and some practice - the boho and flame fabrics rolled like a hippy at Woodstock, and the necklines and armholes look...well.....Not Good. I have enough of both fabrics left for at least 1 more tank, so I'll do some reading and playing with the ugly stuff before trying again. SHE likes them, which is really what counts, but *I* am not happy with them.

Next up: The 1944 House Dress from Decades of Style. I traced the pattern last night, and will start the muslin later today. I *need* a few things that FIT, so that's why I seem to be fixated on sewing right now. I plan on tweaking my weekly routine - Right now I work/school in the AM, 12 - 3 is hobby time (knitting/sewing/reading), 3-ish - 5 is dinner prep/house tidy, and after dinner is family/hobby (depending on what the family wants to do. Lately the kids and SG have been gaming together (TF2), so *I* get to play with fabric.) I want to designate a specific day for each thing - I just need to figure out what days work best for what hobby.

Need to go hang the laundry out before it gets any hotter!

This entry was originally posted at http://fiberaddict.dreamwidth.org/846106.html. Please comment there using OpenID.
Collapse