Yesterday was a GOOD day. I don't normally check email on Shabbat, but I did yesterday AM, because Hearthie had offered to do my colors, and...well, we had plans and I hoped that would help me not make a mistake. :lol:

See, there was an ad on CraigsList....seems the Plano chapter of the Sewing Guild of America (American Sewing Guild? Something like that) had been donated too much fabric/sewing stuff, and needed to downsize....so they were having a garage sale. We drove 57 miles, but it was worth it. 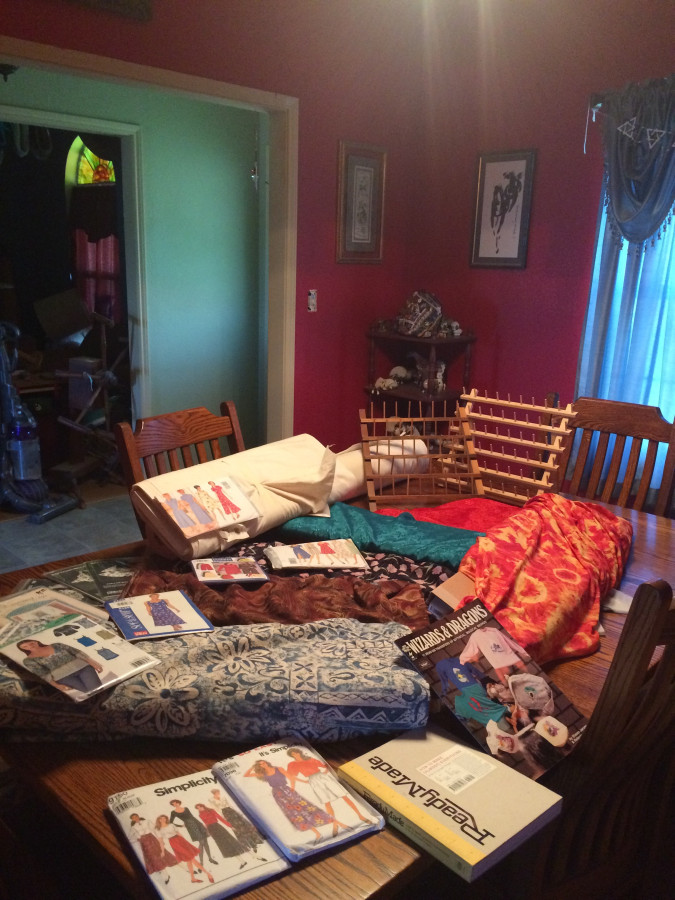 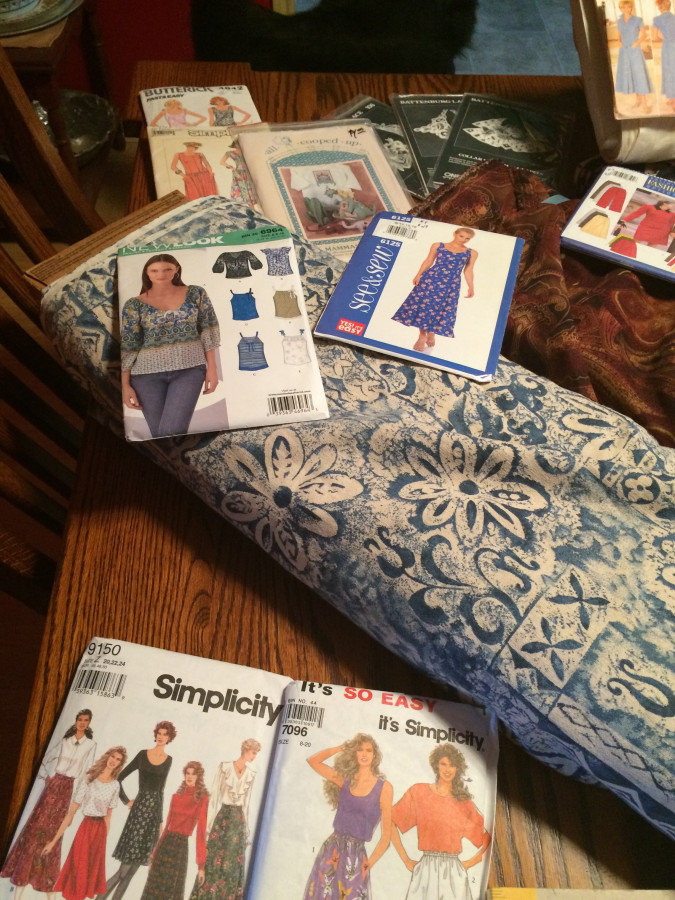 The blue print will be a dress, skirt, and top...and probably a bunch of other things. :lol: The brown will be a dress and skirt...not sure about a top, but hey! $5! (Patterns were $0.25...and we got quite a few. Most are sleeveless dresses.....I'm going to raise the dropped waist ones, the rest will probably be sewn "normally". :lol: 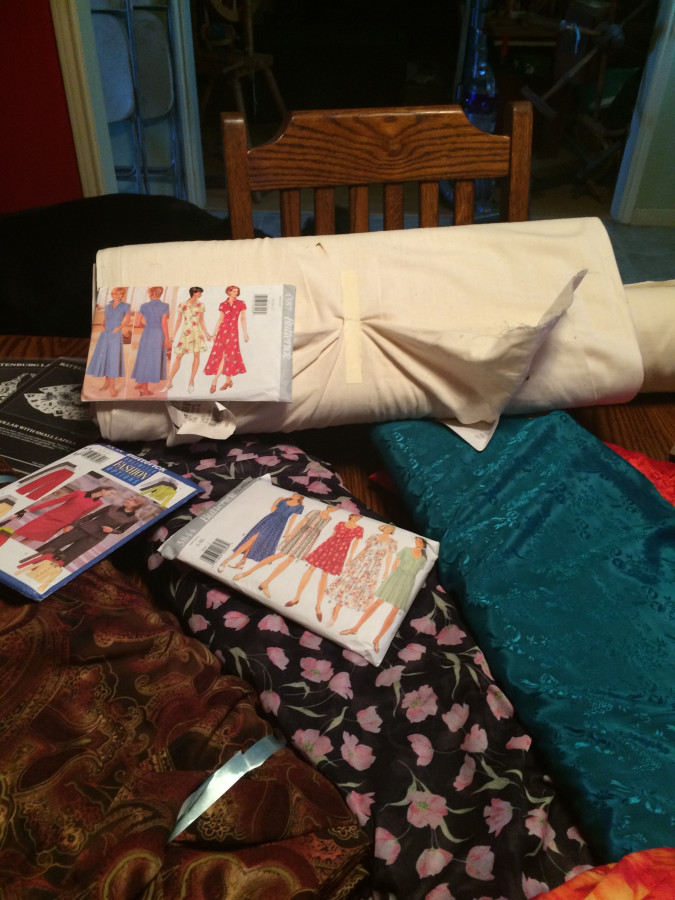 The floral needs to be lined, but I actually like it. The teal...well, I LOVE teal. This is a better shot of the brown - I just loved the print. I left a dark purple and black paisley, because it was just too dark for me - it was hard, but I don't think I could make it work. 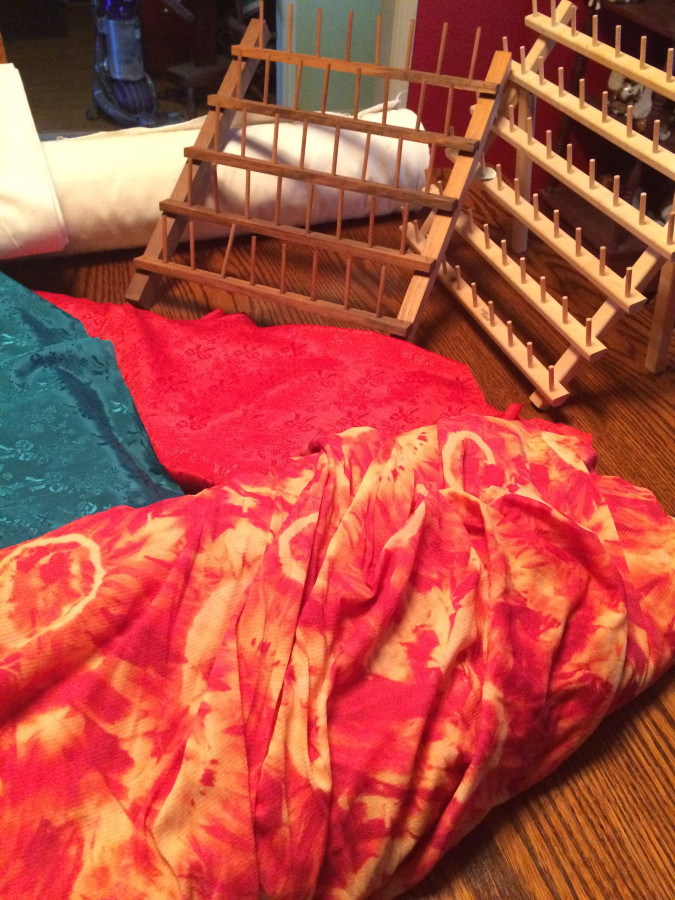 The flame-looking fabric was Herself's request. It's a knit (nasty, thin, roll-y knit. :shudder:), but she LOVES the color - what's a Mom to do? :lol: The orange isn't the right color here - it's not flaming, it's more.....reddish? It actually leans a little coral (although Herself vehemently denies this - she HATES coral; she claims it's a nice......Red. Uh-huh. It leans coral, is all I'm saying. :lol:) She can wear it, and I can too - I checked in the mirror when we got home. NOT my favorite color, but it'll work. It's also the same fabric as the teal - it has a subtle bows-and-flower pattern going on. This is a closer match to the teal - it's not dark, and it leans green. The 2 bobbin racks were $2/each.

All of the patterns are "vintage" - I think most of them are from the '80s. I tried to grab classic looks - the dresses are semi-fitted, with flowy skirts and simple bodices. The skirt patterns are all full, because that's what I prefer. :lol: I think I ended up with 10 patterns - not too shabby! I didn't pay attention to the sizing (don't panic!) - I have a Craftsy course on grading patterns, so I felt confident in buying what I liked instead of picking thru for my specific size.

We then hit JoAnn's - I can't find my tailor's chalk - and I got 2 more patterns (Simplicity were on sale for $1.99). 1 is a reissue of one from 1940 - it has some cute blouses. The other is a skirt pattern that Ali shared with me. LOVE the skirts.....I should be good to go now. Most of the dresses and skirts have the same silhouette, but that's OK by me. Sleeveless is good for Texas - especially in late Spring/Summer/early Autumn.

I'm set for muslin, now - I can fit patterns to my heart's desire. :lol: Seriously, this takes a weight off; I no longer have to fret over how many re-dos I do. I'm trying to not waste fabric, but I can be a little less cautious with my changes now. :lol: I still need to pick up some power net and soft elastic - I need some new bras, and it'll be cheaper to make my own (AND they'll fit better!). :sigh: It's never-ending, isn't it?

This entry was originally posted at http://fiberaddict.dreamwidth.org/846737.html. Please comment there using OpenID.
Collapse