First up, this isn't a Sewing blog - I AM sewing right now, and I want to share what I am learning, and track WHY I make the decisions I do when I am trying to fit a pattern. *I* like knowing WHY someone decided to do what they did, instead of just reading "and then I added 6" to the front and it fits perfectly!" - I need to know WHY so I can figure out what to do for me. I also decided to show my fails, as well - because, again, I need to see WHY something failed so I can understand the whys of the fixing of it. (Make sense?) So, for the next little while, I will be posting a lot on my sewing - because I want to help other newbies, and I want to track what *I* did, so I can do it again later on. I'll share finished projects, of course - but I am not planning on doing a diary on every single item I make (especially since I am planning on doing multiples of patterns that work well with my figure. Why mess with something that works, right?)


So. Here we go again. This time, I am sewing the 1944 House Dress from Decades of Style - this one: 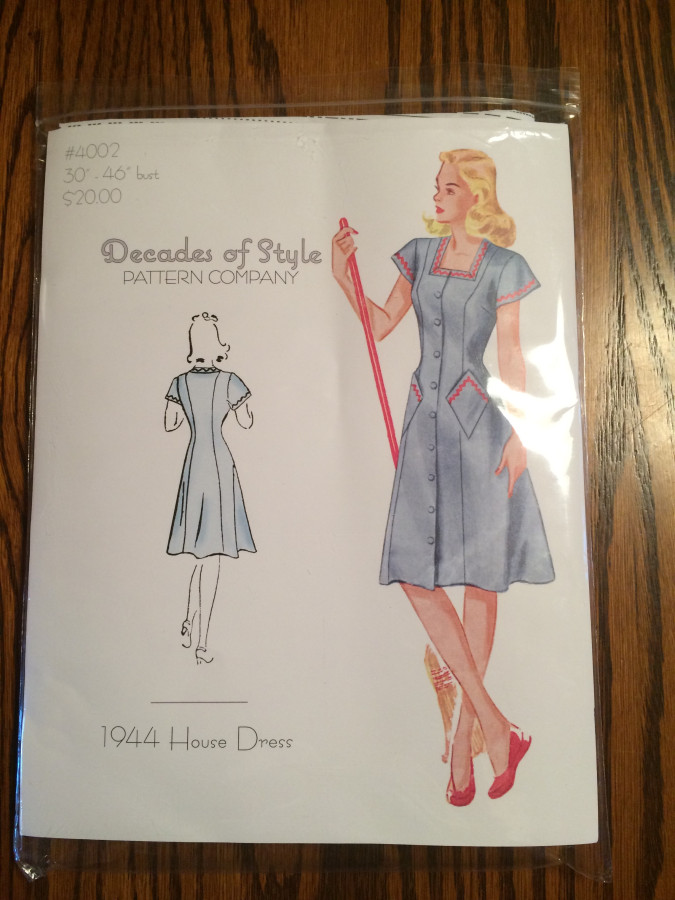 It has a lovely shape, doesn't it? So flattering to just about every body. A really GOOD thing about this pattern, though, is on the back of the envelope: See the chart? It gives you not only YOUR measurements, so you can choose the right size to cut, but also the *finished* measurements of the dress. This is good - I can see that this dress is supposed to have 4" difference between my measurements and the dress; that's plenty of room to move around in. (More than *I* want, actually, but we'll worry about that later.)

Anyway. According to the chart, a 38 will fit me like a glove. :lol: So, that's what I cut out, knowing I'd need to do a bit of fitting - because my full bust is 42.5", and my waist is 35-ish. (Depends on the time of month, the weather, what time I got up, etc. :lol:) After a bit of thought, I decided to cut the pattern out as written, and sew it up as if it would fit perfectly.

Here's how it fits: 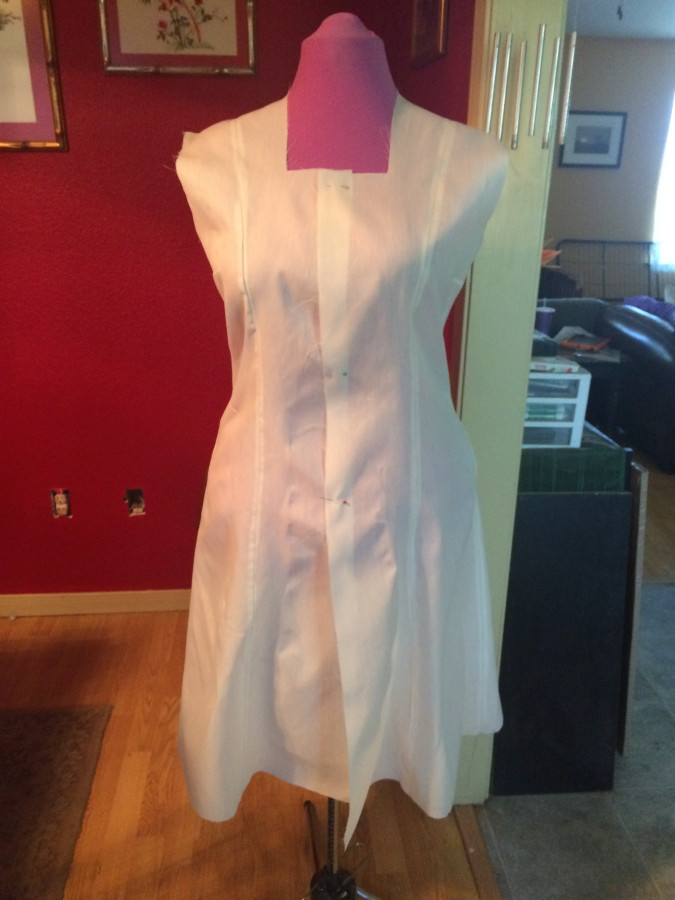 The front is a bit snug across the bust, and the waist is too large - just like I thought. The hips are a bit snug, too. So much for the 4" of ease, right? :lol: 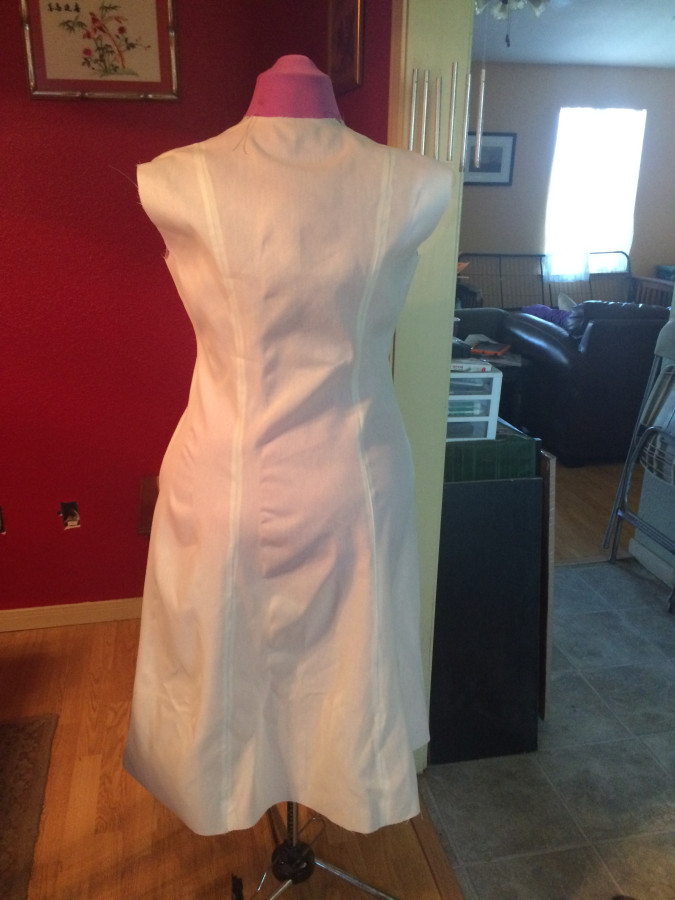 The back looks OK, except for the hips. I *did* try it on me, just to verify - yeah, the bust is too tight, yadda yadda yadda. Cat is a pretty good match for me, shape- and size-wise.

I sat and had a good, long think. See, there are many ways you can adjust the bust on patterns. One of the easiest on princess-seamed items (which this is - see the seams down the front? It's what gives it that lovely shape.) is to simply drag the pattern pieces apart the distance you need to add (in my case, that's 2" or so) - wait, let me show you the calculations: Anyway - I gave it some thought, and simply sliding the side piece - while being easy, and it WOULD work, would also add a bit more fabric to the waist.....which would mean I'd have to do MORE tinkering (which, honestly, I WILL have to do, but.....if I'm honest, I didn't want "easy". I wanted something more......"professional". Yeah, I'm weird. I also want to learn.). So I decided to do a "real" FBA, involving cutting the pattern and adding paper. :cue freakout:

So, I pulled out the side front of my pattern (because I had checked with google.....on princess-seamed garments it seems to be the proper piece to mess with. *I* don't know, but that was the overwhelming consensus.), and started marking it up. I checked a LOT of websites on this technique - and I will be honest. These pictures? Are from the 2nd attempt. The 1st attempt involved slashing the pattern at the waist, doing the FBA, then attempting to tape it back together....and...um...I didn't take photos because it FAILED, miserably.

I re-traced the pattern piece, then started marking it up: 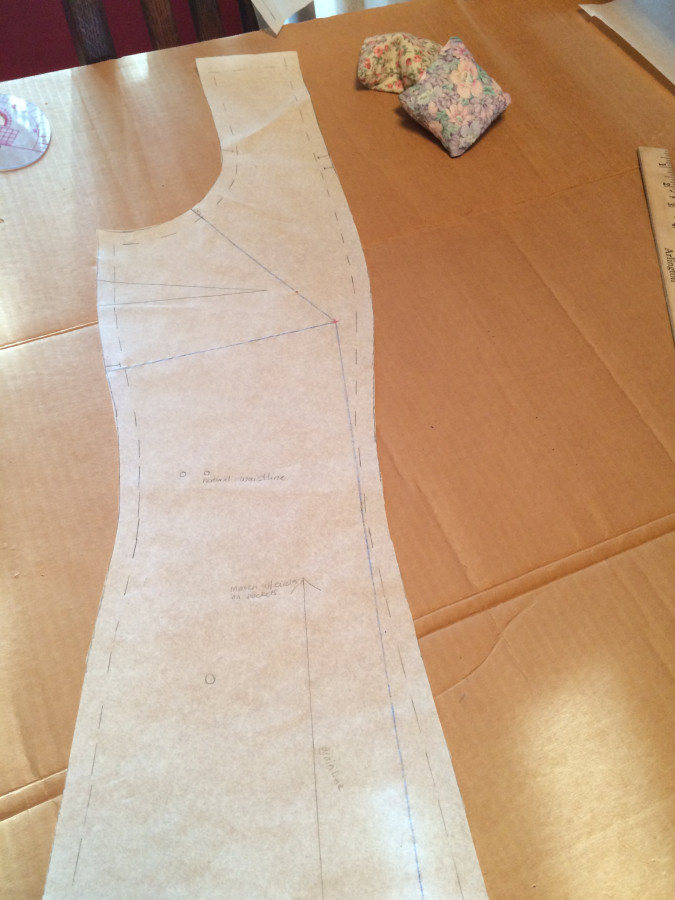 I marked the apex of the bust (the "fullest part" - I measured me, then transferred that to the pattern), then drew a line up from the hem to it, then from it to a spy about 1/3 of the way around the armhole. (Because that's what everybody said to do. Not sure WHERE the 1/3 came from.) I was supposed to then drew a line from the bottom of the dart, thru the apex, and thru the side of the pattern - but I moved that line down a bit. The dart, as written, points ABOVE my apex, and it's supposed to point AT it. I traced the dart onto a piece of scrap paper and taped it on in what I thought was the "correct" place before cutting the fabric. I just guessed at the position of the 3rd line. I think you can see them on the photo - I tried to make them as dark as possible, without tearing the paper.

Then I picked up my scissors....and CUT the pattern: 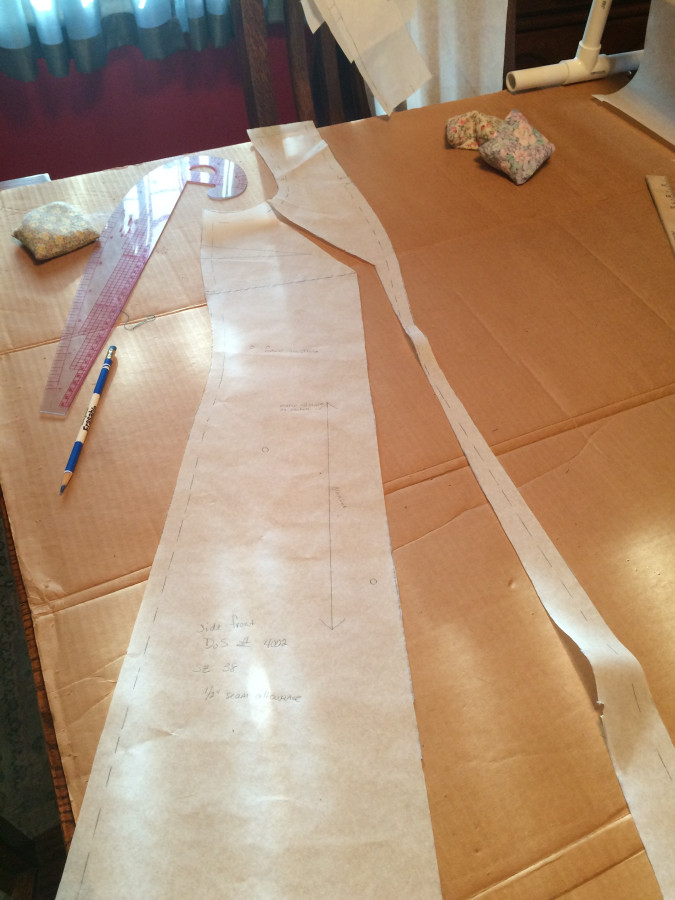 I taped the front seam down, then spread the pattern the 2" I needed, and taped the other side down. Interestingly, doing so CLOSED the gap caused by the cut thru the dart (which I had forgotten to cut in this picture - oops!)- it was supposed to open up the dart a LOT, so that I'd have to close it later. :scratches head: I taped everything down, added the extra length to ALL the pieces, re-cut them (in muslin-muslin, this time - I wanted a change from white. :lol:), and basted them together. 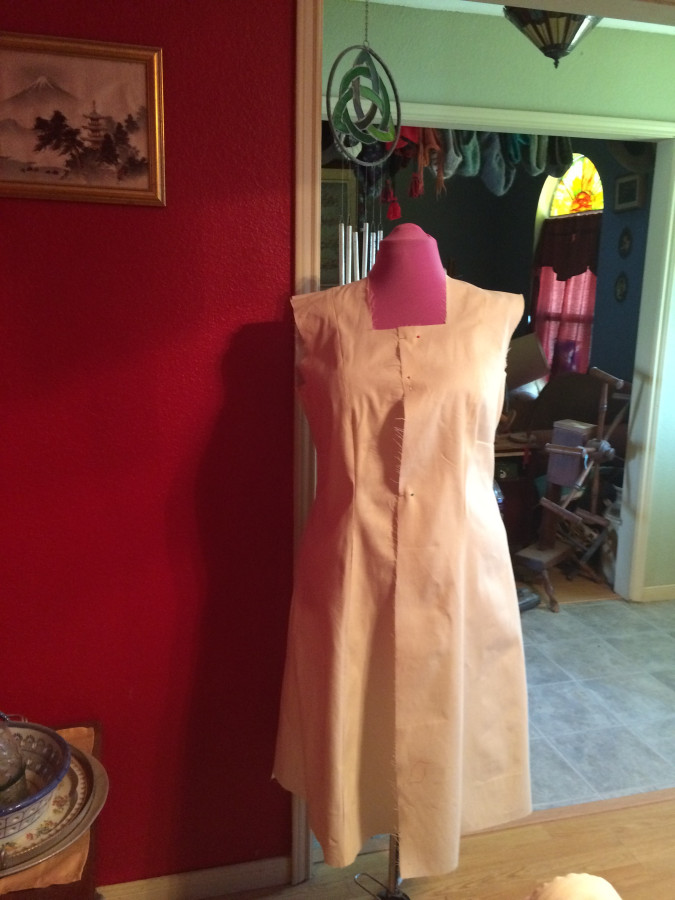 The new front - the bust is much better, now, but the waist! AHHHHHHHH! :sigh: Looks like I have enough fullness in the hips, now, but it's all concentrated in the front. Not sure about that.... 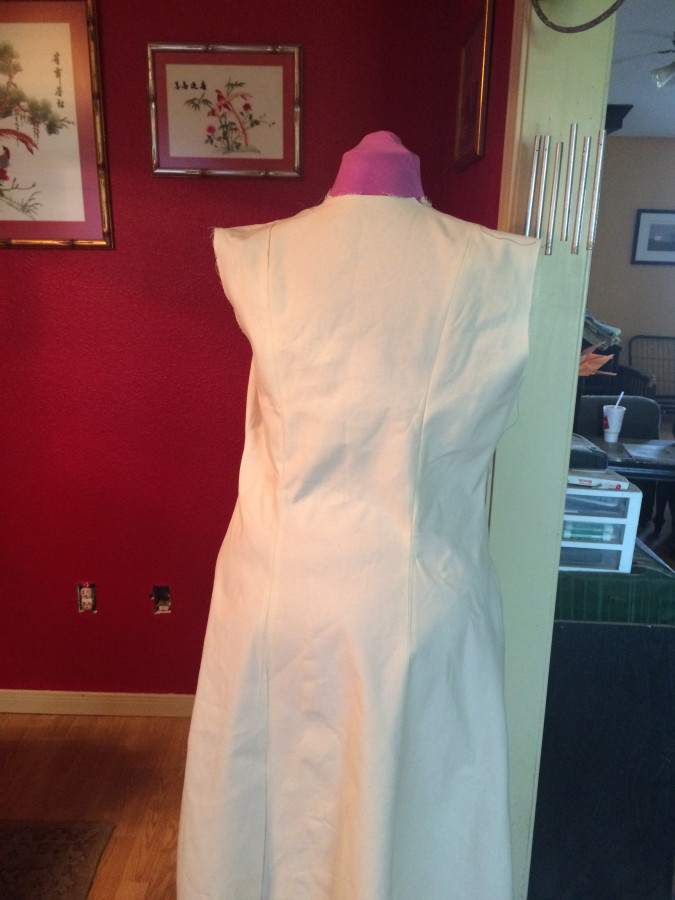 The back is the same, except a titch longer. Somehow it ended up a wee bit shorter than the front...but this is pretty much a wash, anyway, so I'm not worried about it. Did I mention this attempt was really a learning experience for me? :lol: 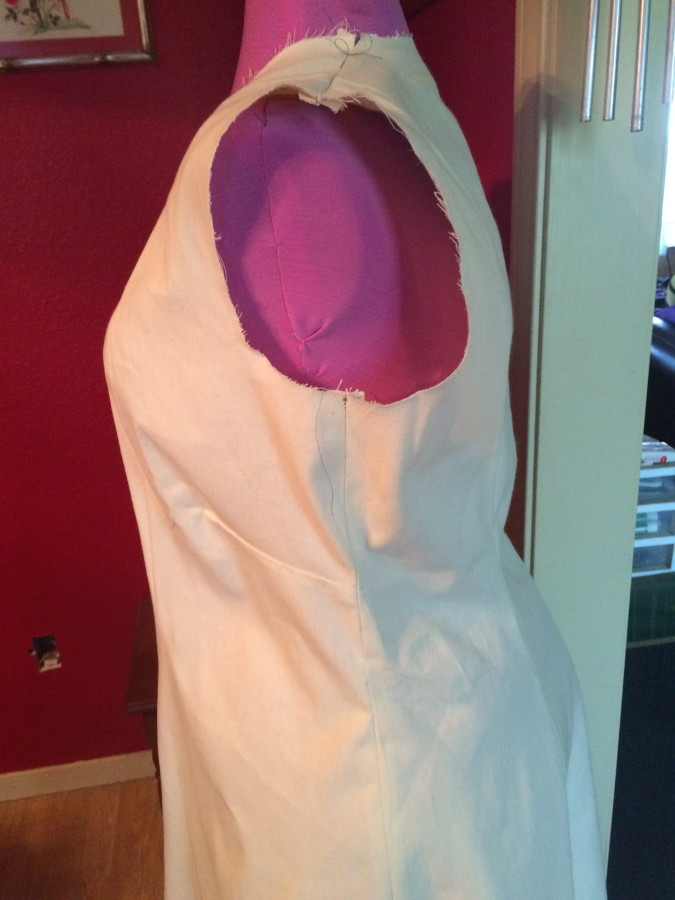 The arm was a surprise to me - it's MUCH too loose, now. It makes sense - sort of. I did manipulate it a bit in the FBA, but I didn't think it was by THAT much.

I think I'm going to do a bunch of grading. I THINK, if I do a 38 for the shoulder/neck, go to a 40 for the bust, then back down to a 38 - or maybe a 36 - for the waist, then up to a 42 for the hips, I should be good. It's a LOT of blending, though.....but if I mark the areas I start the blending from (with sticky arrows), it should be relatively painless....right? :sigh: (I'm also not sure if I need to do anything to the back - guess I'll try this and see if I need to do anything else to it.) I'm kinda thinking it might be a wee bit...big, though, because of the ease. :scratches head. We'll see - I'll double-check my measurements before I start tracing off the pattern again to be sure I don't go TOO big, especially in the hip area. I like swishy skirts, but too much fabric is a problem. (I have plenty - the largest dress takes 3 1/3 yards. I bought 4+ yards of everything I wanted to use on this. So.....it's all good.)

Why all the work? Because why settle for OK when I can - with a bit of effort on my part - get FANTASTIC? And, this only needs to be done once for this pattern - then I can just cut my fabric from the Frankenpattern for each successive dress (until I loose enough weight that I have to do it again. :wink:) And, knowledge is NEVER wasted - what I'm learning with this can - and will! - be applied to other patterns down the road. AND - it's good sewing practice.

This entry was originally posted at http://fiberaddict.dreamwidth.org/847089.html. Please comment there using OpenID.
Collapse