Have some photos of my finished 1940's Homefront Overalls by Wearing History: 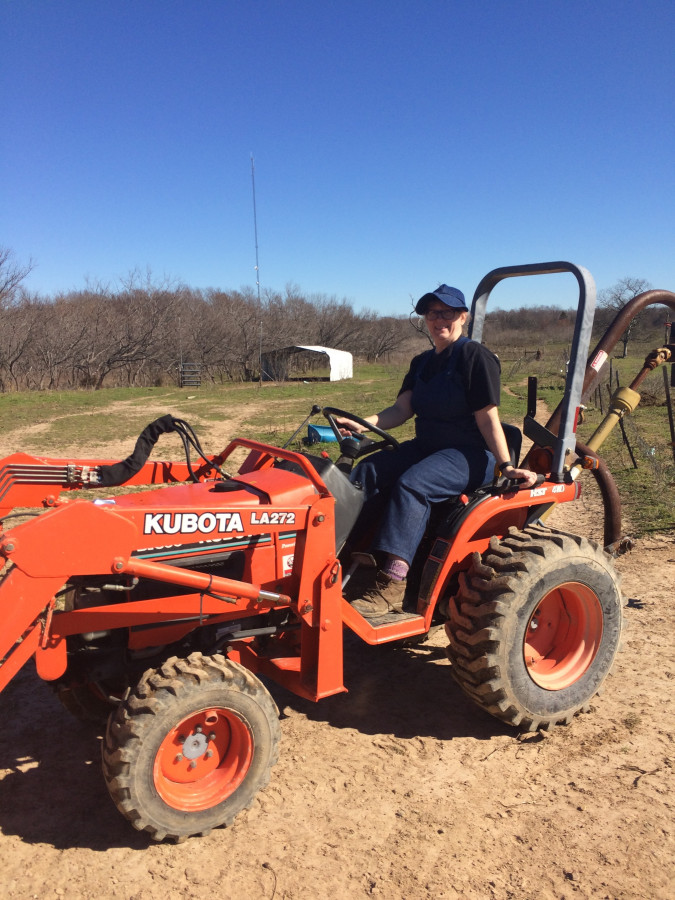 See, I can drive a tractor! 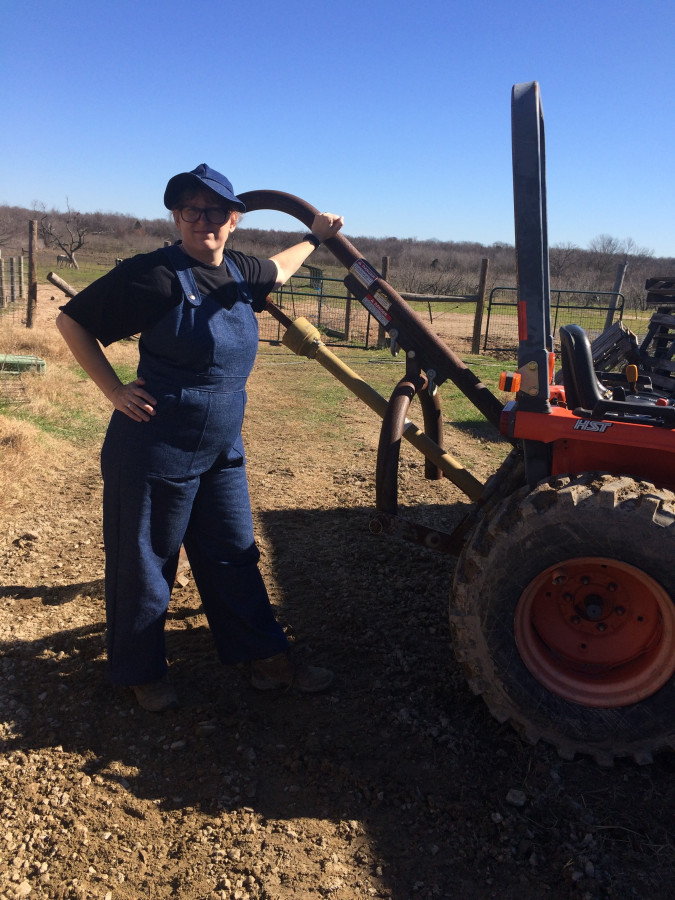 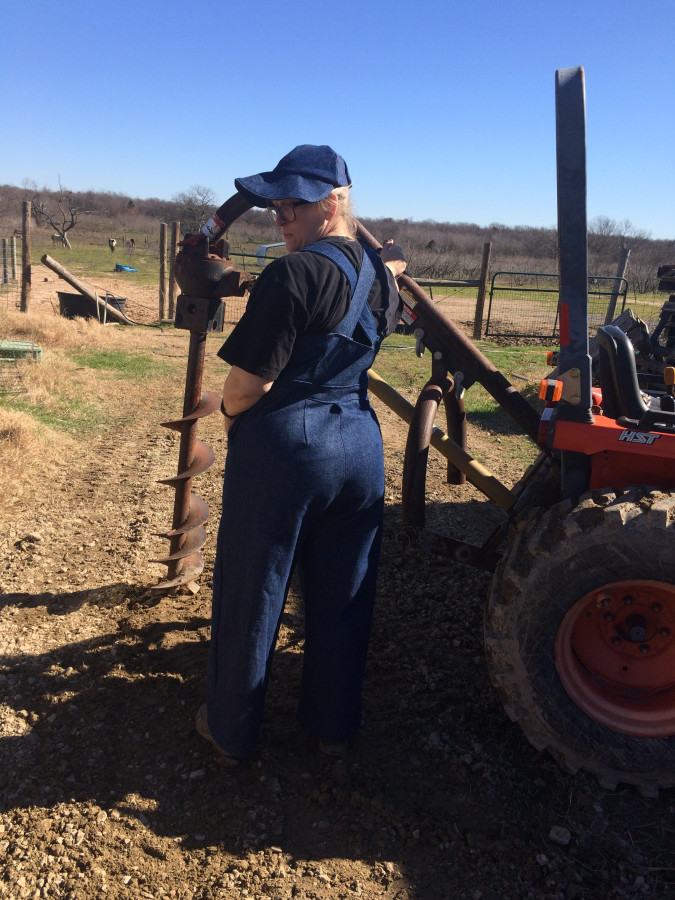 Front and back view....they fit. More on that in a bit.

And, the cap and bodice have a secret! 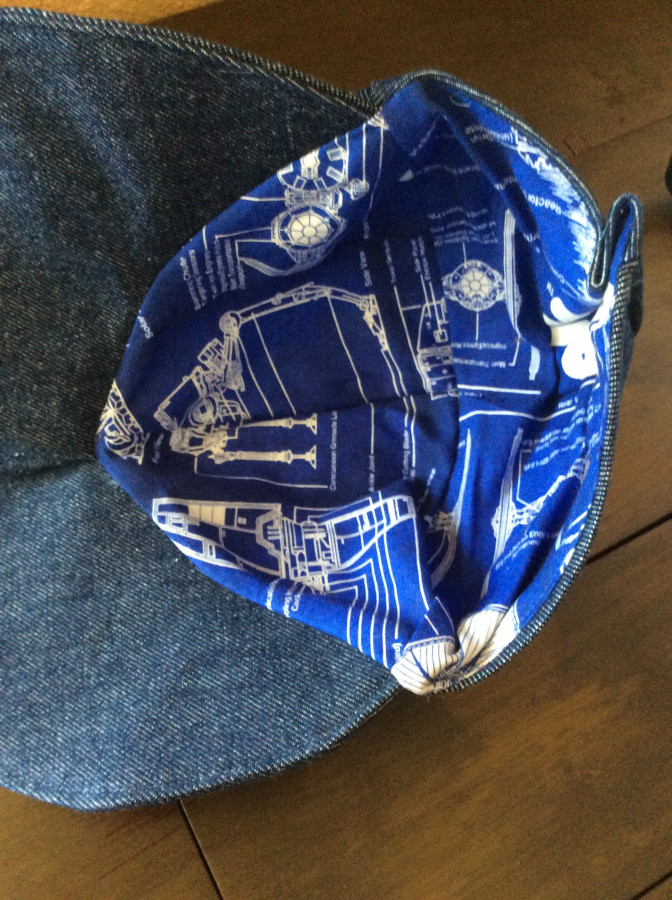 Yes, the bodice, pockets and cap are lined with Imperial Blueprints. No one would think to check there, would they? :snicker:

OK. So, I finished the overalls. I used my block pattern as a 2-D model of my 3-D body..which is how I assume you are supposed to use it. Some people use blocks/slopers differently; whatever works for you, right? Anyway. I KNEW this pattern was snug in the hips. I noted that, and went up 1 size to compensate. I had 1" on each pattern piece in ease (see the problem? I didn't...), so I thought I was good to go.

I can drive the tractor in them. I can dump feed. I can even toss hay. I canNOT, however, do anything extremely strenuous without popping the side buttons. (Like, say, dig out 7 months of composted goat by-products.) Ah, well - this was a usable muslin anyway, and I learned a LOT:

1. 1940's pattern instructions...leave a LOT to be desired. They wanted me to assemble the bodice, then assemble the pants - all the way! - then attach the 2 together at the waist, THEN attach the facing and button band, and THEN do the button holes. I guess, if I were hand-sewing, this would make sense. On a machine, however....not so much. It's hard to manipulate 3D pants on my sewing machine. As a result, the facings and button band are ugly. (I saw some of this coming, so I did the buttonholes while the pants were flat......which meant that I had to put more buttonholes in the facing. :face palm:

2. My block pattern has NO ease. Wanted to emphasize that!

3. I should read ALL the instructions, and visualize doing them, before beginning to sew. :lol:

Now. I am pleased with how they turned out. IF I do another pair (and...I might.) I'll do them differently:

1. I'll line the bodice again (the instructions want you do use bias binding along the edges, instead. I am using a Heavy-Medium weight fabric....this would have not been fun.), but I'll only sew the lining to the top, and I'll include the straps as I do. That way, when I flip the lining to the inside, the straps are attached neatly.

2. I'll sew the right-side leg seam of the trousers, then attach the belt/bodice while this is flat. THEN I can attach the button band and facing, and do the buttonholes easily. (Well, sort of. The bottom button hole is almost INSIDE the pocket. I need to think about that a bit....)

3. Make sure I have 2 full spools of thread.

ETA: Sorry about the abrupt ending. SG decided we needed to go NOW!, so....we went. :lol: We had to go pick up Dad's 2nd dog - a Pomeranian named Sam - from his house. My brother took the other dog (a very very small Chihuahua) on Thursday - he thought he'd found a place for Sam with Operation Kindness, a no-kill shelter, but they decided he was coughing and they couldn't take him. :sigh: I simply could NOT leave him in the house by himself. SO....we now have 7 dogs. For the moment. We'll see how they acclimate.

Anyway. Right now the overalls work. They could work a little better, but they're OK.

This entry was originally posted at http://fiberaddict.dreamwidth.org/859414.html. Please comment there using OpenID.
Collapse