has been....interesting, shall we say. I guess somebody invoked the old Chinese curse, "May you live in interesting times" because, folks, it has been Interesting.

Especially Wednesday. It was Herself's braces OFF! day. SG was home, so I invited him out to lunch with us after. Himself decided last minute that he didn't want to go - it was Star Wars day, after all, and he had just bought some "new" SW games that he HAD to play. I pointed out no lunch; he pointed to the freezer. :lol:

Seems that right after we left, Chloe started barking. And barking. And barking. He went outside - she was "playing" with a turtle. He, being a soft-hearted kid, pushed her away and tried to get the turtle to remove it. Chloe lunged at it; he shoved her away again. She lunged again, and Bree - who had been standing there watching - decided Chloe needed a lesson in minding and lunged for her.

Only, Himself was in the way. Of 2 very large dogs. :sigh: Bree got him on the hand, and immediately backed off. He got knocked down and trampled a bit, but managed to get into the house and on the phone with me before starting to panic. *I* started panicking, but managed to hide it, thank God.

I went out to the waiting room and sent SG to the house. He picked up Himself, came back and got us, and off we went to the ER. :sigh: 4 hours later, Himself was OK - no stitches, just 2 bad puncture wounds on his left hand, 1 on his elbow, and 1 on his right arm, plus a lot of scratches from Chloe's claws.

We got home (finally!), and I went to look for the turtle. Which was on the back porch (Chloe had brought it there) with 2 punctures in it's shell....turns out, it wasn't a cute l'il turtle that needed saving. It was a demon-spawn SNAPPING turtle that deserved everything it got (sorry, y'all, but I have been chased by a snapper before. They are EVIL - and if IT had gotten hold of Himself's hand, things would have turned very bad, very quickly.

Anyway. Good news is that (besides the world having 1 less snapping turtle) I had drug my Pax Eire socks to the Ortho with me (I have been studiously IGNORING them lately. I went off them, and couldn't drum up any knitting mojo.).....the time in the ER? Was prime knitting time - see here: 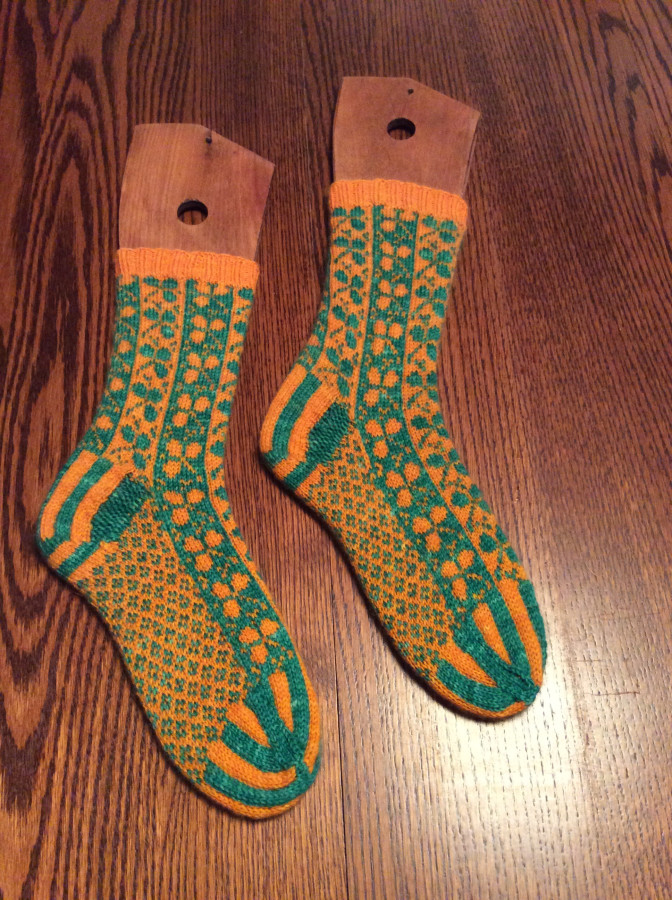 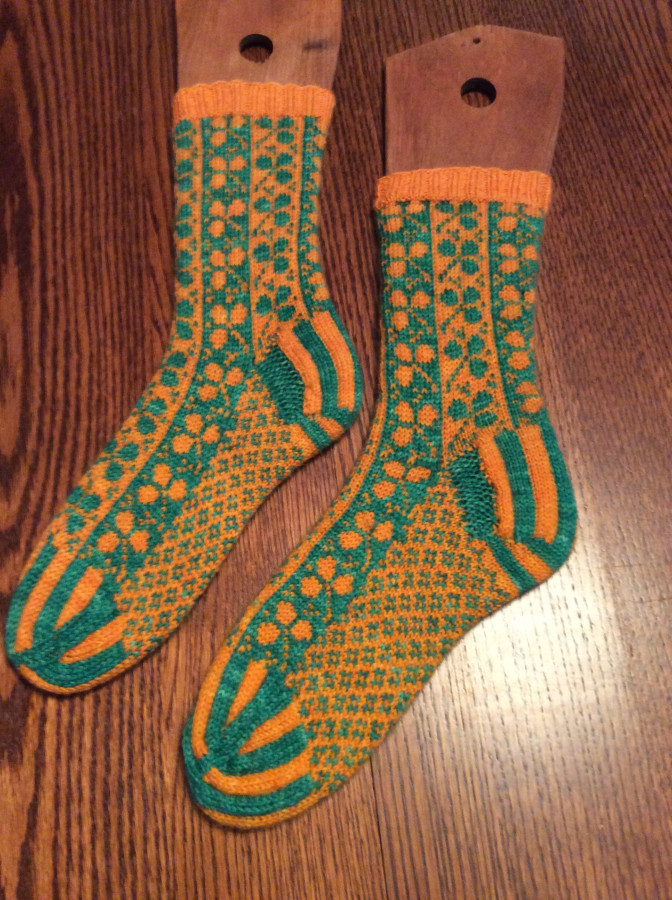 They are nice socks - Cashmere/Merino yarn! - but....I just lost interest in them mid-way down the foot of #1. Sometimes that happens.....:shrug: I have started another pair (What???? I Knit. Except when I lose mojo - but it's back for now.) in a nice, over-spun Merino in a lovely turquoise color way. We'll see how long it takes me to work them...:lol:

I had started another apron.....today I put the binding foot on, cut the bias strips (but not very....um...accurately. :sigh:) and took it for a test-sew. That foot is da Bomb! But you have to pay a lot of attention to it, and the resulting bias binding is only 1/4" wide. I have discovered that I prefer 1/2" wide binding.....and that if I don't pay close enough attention the binding gets screwed. :sigh: That apron was a fail, and is now in the trash. (No, seriously - I didn't feel like trying to seam rip 2 yards of binding; I tried and the edges of the apron started seriously fraying. :sigh:) I'll reattempt that apron later.....lesson learned. :lol:

Gotta do some knitting - Shabbat Shalom!

This entry was originally posted at http://fiberaddict.dreamwidth.org/867773.html. Please comment there using OpenID.
Collapse