But it's a good tired! Let's see if I can get y'all caught up.

1. Studio: Have recovered the couch in the Studio (this was a while back, but still - need to update!). It was a really....out there 60's brown/yellow/orange/brown plaid; now it's plain canvas. I also made a quilt and 4 or 5 throw pillows for it. MUCH nicer in there, now!

1a. We also got rid of "Big Ugly" - the old entertainment center I had in there. Now I have a double Billy and a single, in white. They....well. Big Ugly was 3' deep; the Billys are 15". So all the fleece is hanging out next to the loom. But! The Billy's have glass doors, and my yarn looks VERY NICE now. I can actually SEE what I have....which...well. I don't need any yarn for a while. I have enough in most weights to make almost anything. (Only 1 sweater's worth set aside; if I decide I NEED another sweater, we'll have to go shopping. But for hats/gloves/socks/scarves, I'm set.

2. Knitting: Have banged out 3 hats and a few pairs of socks. I've slowed down recently - I messed up my right elbow last month and can't do a lot without pain. :sigh: I have 2 pairs of socks on the needles, but they are stalled. No biggie - I'm sewing, instead!

3. Sewing: I joined Sew Over It's PDF club, and have taken advantage of it. I jumped on the new "Ultimate Culottes" - I have 3 pair, so far. Have plans for a few more - the goal is to get rid of my default sweat pants, and replace them with something a little more feminine. These fit the bill, at least for Spring/Summer/Fall. Have some Jeans patterns I need to work on, but right now I'm focused on Summery stuff. (It's been in the 80's...in MARCH and early APRIL. How hot is August gonna be????) Fabric Mart had a huge sale, and I scored some really nice Cotton Lawn. Already knocked out 1 SOI Vintage Shirt Dress; I have SOI's Nancy Dress (a Swing Dress) that I think will make a lovely tunic that I will tackle next. (SOI FITS me. I have to do very very little modification to their patterns, which is very very rare for me. SO NICE!)

4. Life, in general: Himself is.....better. He has developed an interest in modding Nerf blasters, thanks to the YouTube channel "Battle Universe". We've been having Family Nerf battles every Saturday evening....I am bruised, but it's fun. He still can't deal with crowds, so he stayed home yesterday while the rest of us went to Dallas Fan Expo.

FYI: IF you should decide you'd like to take your family to a Con (and have never been), might I suggest Sunday as your first visit? It's generally less crowded and a little bit cheaper. Most vendors (but not all!) are willing to slash prices so they don't have to move the stock back home. BUT.

If, say, there are more than 2 autographs you want to get, and they are BIG names, I highly recommend you spring for at least 1 Premium ticket (or VIP, but those prices are.....well. $$$$) We learned this with Mark Hamill - Sunday tickets, long lines, almost didn't get the autograph after HOURS of standing in line. For David Tennent, I did the Premium - we got 5 line jumps, so there was very little waiting.

This time......well. It was HUGE. Just some of the stars: Princess Bride Vizini, Wesley, and Humperdink; 2001 (the 2 main male characters); Back to the Future Biff, Doc Brown (Michael J. Fox and the girl had to cancel last minute, but STILL); Val Kilmer; Chuck Norris; Richard Dean Anderson; Inara from Firefly, Anthony Daniels (C3P0), Billy Dee Williams (LANDO CALRISSIAN, Oh My Goodness!!!!)...and the list honestly GOES ON (oh, Ben Afflack was there....he's a bit full of himself.). There were 9 autographs SG wanted, so -after a lot of waffling, to the point he missed the VIP pass - he went for a Premium. He decided on 4, total...and got the 3 "big" ones on Saturday. (He would have gotten some on Friday, but the guys he wanted didn't make it before he had to leave.) Sunday he got Inara's while Herself and I waited in line for the 2 SHE wanted - the English voice actors for a Japanese anime called "My Hero Acadamia". If you haven't discovered it yet....go. Go NOW. It's just started Season 3, and it's WONDERFUL. (Basically humans have evolved super hero powers, called "quirks". There are a few quirkless folks around - the main protagonist is a 14 year old quirkless boy named Midoriya. (Called "Deku"). The Number 1 Hero is All Might - and Herself LOVES them. Here, let me show you: 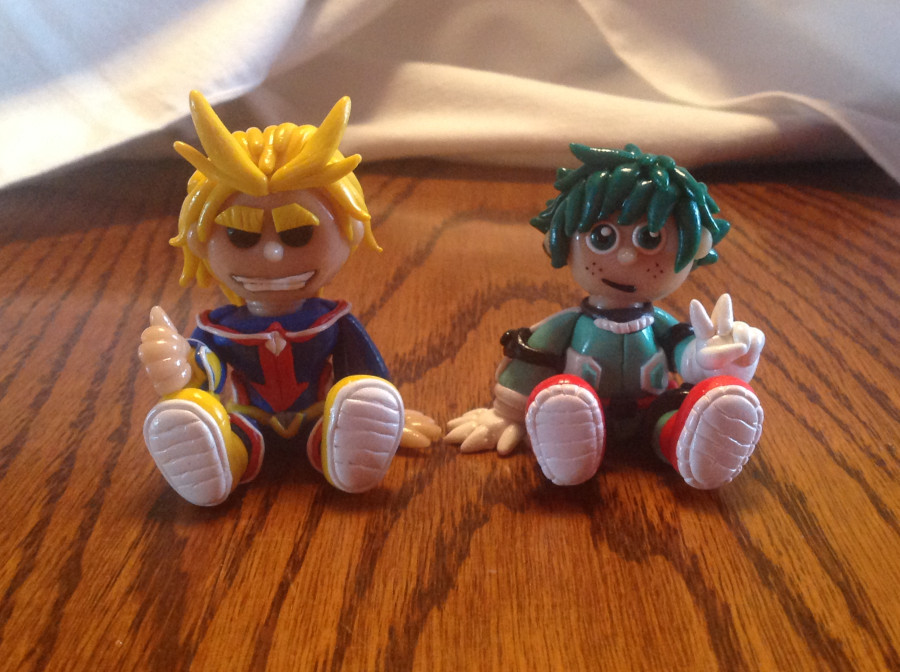 When she found out Justin (Deku) and Chris (All Might) were going to be here, she pulled out the Sculpy and went to work. :lol: We took them with us yesterday so she could give them to the actors....who are both simply LOVELY people. Very, very, very nice and personable, and both of them were SO NICE to my out-of-her-element Aspie. :hugs: So nice, in fact, that she willingly got selfies with both: That, my friends, is Chris Sabat, voice of All Might (and Vagita from Dragonball Z). He is.....well, you can see. :lol: (She is bounding as Bonnie from FNAF. She crocheted the guitar. Yes, it's awesome. :lol:) This is Justin Briner, voice of Deku. VERY nice guy!

She is thrilled - SG bought her a print with the whole ensemble (Class 1A from the school), and both Chris and Justin signed it. If any of the other actors come thru, she'll get them to sign it, too. (Yes, *I* also have their autographs...because I really like the show, too.)

We came home with 2 new plushies for her (Oh My - 40" tall Bonnie and Chicka from FNAF. They barely fit in the car!!!), a Gjallorhorn prop from Destiny (it was a flash sale....for 75% off! Himself is looking into modding it to actually fire Nerf missiles. :lol:), a bunch of art work, and some custom-painted Nerf blasters. Oh! We also had a photo op with the Princess Bride trio - it was a hoot! It was a good day! But exhausting - today has been very laid-back.

This entry was originally posted at https://fiberaddict.dreamwidth.org/906677.html. Please comment there using OpenID.
Collapse